It's only a sick mind which can produce such bogus arguments, says Jairam Ramesh 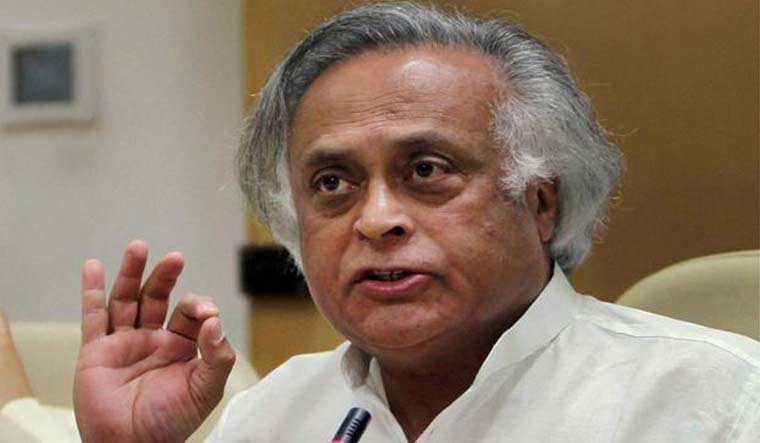 The Congress, on Friday, hit back at Home Minister Amit Shah for linking the party's protests to the Ram temple foundation day, saying it was a desperate attempt to "divert, distract, polarise and give a malicious twist" to its democratic demonstrations against price rise.

"It's only a sick mind which can produce such bogus arguments. Clearly the protests have hit home!" Congress general secretary Jairam Ramesh tweeted.

Speaking with reporters outside Parliament this evening, Shah linked Congress leaders' protest in black clothes over the issues of price rise and unemployment to the party's "appeasement" politics to convey its opposition to the Ram temple foundation laying by Prime Minister Narendra Modi on this day in 2020.

In a sharp retort, Ramesh said the home minister has made a desperate attempt to "divert, distract, polarise and give a malicious twist" to the party's protests against price rise, unemployment and the Goods and Services Tax (GST).

Shah had said the construction of the temple is now in full swing and that the Congress is conveying its opposition to the temple construction. He said the issues of Enforcement Directorate action against its leaders and price rise were only excuses.

Wearing black clothes, Congress leaders hit the streets on Friday to protest against price rise and unemployment with a host of them, including Rahul Gandhi and Priyanka Gandhi Vadra, being detained by police amid dramatic standoffs outside Parliament and the AICC headquarters in New Delhi.

Congress MPs, including former party chief Rahul Gandhi, staged a protest in the Parliament House complex and then proceeded to take out a march towards the Rashtrapati Bhavan as part of the party's nationwide stir against price rise, GST hike on essential items and unemployment.