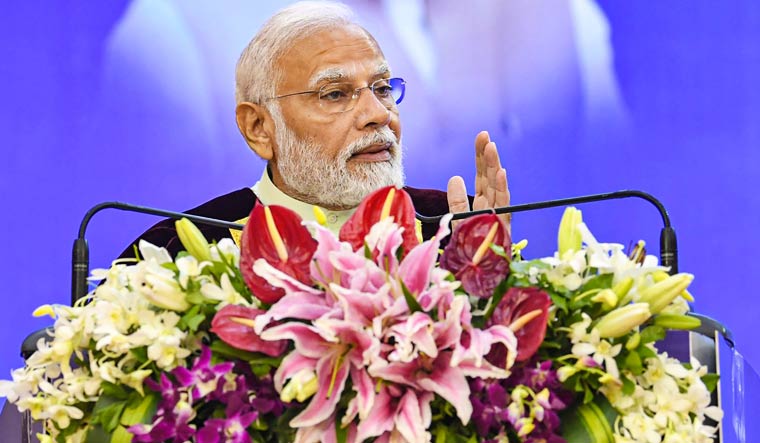 Prime Minister Narendra Modi on Friday said India is now in company of select countries like the United States, the United Kingdom and Singapore where new trends in the global financial sector are shaped.

He said after independence India limited itself within its boundaries due to low self-confidence and "slavery" of hundreds of years, but now things are changing and the country is rapidly integrating itself with global markets.

“Today, India is standing in line with countries like the USA, the UK and Singapore where new trends in the global financial sector are shaped. I congratulate people of the country for this achievement," Modi said.

He said India needs institutions which can facilitate its growing role in the world economy.

“India is one of the largest economies of the world. So, in the future, when our economy will be bigger than it is today, we have to be ready for it now. For this, we need institutions that can cater to our present and future role in the global economy,” Modi said.

The PM said India accounts for 40 per cent of real time digital payments in the world.

GIFT City is making a strong mark as a hub of commerce and technology. GIFT City celebrates both wealth and wisdom. I am happy to see that through GIFT City, India is moving ahead with a strong stake in the services sector globally, he said.

The PM said these three institutions—IIBX, IFSCA and NSE IFSC-SGX Connect—will help India in connecting with the global economy.

Modi said GIFT City, ever since its inception when he was Gujarat CM, was ahead of its times and aspirations of countrymen are attached with the planned business district.

"Unfortunately, there was a policy paralysis in India when the global recession came in 2008. But, even in those times, Gujarat was taking giant leaps in the financial technology sector through GIFT City. Today, that idea has grown exponentially. GIFT City is something which celebrates both wealth and vision," said Modi.

He said the best minds from across the world are residing and growing in GIFT City, which houses office spaces, residential apartments, schools, hospitals, hotels, clubs, retail and recreational facilities.

He said India's identity should not remain limited to just being a big market but it should be a 'market maker'.

“IFSCA should make regulation and operation cost competitive not only in India but also in comparison with countries like the UAE (Dubai) and Singapore. Your aim should be to become a leader in regulations, set high standards for rule of law and emerge as the favourite arbitration centre of the world," the prime minister said.

He said though Indians were known to travel across the world for trade and business in the past, people started ignoring this aspect and glorious past after independence.

Modi gave an example of his native Vadnagar where ancient coins were found during excavation, which according to the PM, show Indians in the past had trade relations with other parts of the world.

"After independence, we had limited ourselves into our own boundaries. It happened because of depleting self-confidence due to prolonged slavery. But, today's new India is changing those old ways of thinking. Today, we are integrating with global markets and supply chain and GIFT City is the gateway to get connected with these global opportunities," said PM.

On the launch of IIBX, Modi said it will help Indian jewellers in purchasing gold and other precious metals in a transparent manner.

"With gold trade getting more and more organised through this exchange, India will be in a position to fix gold prices and it will leave an impact across the world," said Modi.

"In June 2022, assets in mutual funds stood at Rs 35 lakh crore. This shows that people want to invest. Thus, we need to educate them and provide them with required information," said Modi, urging the industry to focus on financial literacy. Union Finance Minister Nirmala Sitharaman and Gujarat Chief Minister Bhupendra Patel were present at the function.

GIFT City (Gujarat International Finance Tec-City) was envisaged as an integrated hub for financial and technology services not just for India but for the world. IFSCA is the unified regulator for the development and regulation of financial products, financial services and financial institutions in International Financial Services Centres (IFSCs) in India.

The building, of which Modi laid the foundation stone, has been conceptualised as an iconic structure, reflective of the growing prominence and stature of GIFT-IFSC as a leading International Financial Centre.

IIBX will facilitate efficient price discovery with the assurance of responsible sourcing and quality, apart from giving impetus to the financialisation of gold in India. It will empower India to gain its rightful place in the global bullion market and serve the international value chain with integrity and quality.

Under Connect, all orders on Nifty derivatives placed by members of the Singapore Exchange will be routed to and matched on the NSE-IFSC order matching and trading platform.