“India a police state, Modi a king,” Gandhi said before he was detained 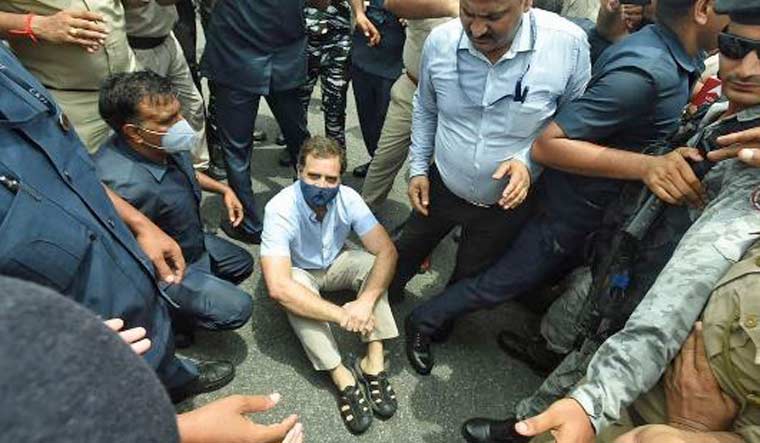 “India a police state, Modi a king,” Gandhi said before he was detained.

Gandhi was protesting a range of issues from price rises and GST at Rajpath surrounded by policemen. He was detained after a 30-minute standoff. 17 other Congress MPs have been detained too.

Gandhi appeared before the ED for questioning for the second time on Tuesday.

Gandhi posted a tweet which read: "Look at the dictatorship, cannot hold peaceful demonstrations, cannot discuss inflation and unemployment. By misusing the police and agencies, even by arresting us, you will never be able to silence us. Only 'Truth' will end this dictatorship."

The Congress on Tuesday said it will stage a 'satyagraha' all over the country to protest the Enforcement Directorate's summons to party president Sonia Gandhi in the money laundering case linked to the National Herald newspaper.

Congress MPs had met at the office of Leader of Opposition Mallikarjun Kharge in Parliament premises and are likely to stage a march towards the ED office to protest the questioning.

AICC general secretary Ajay Maken claimed they have been denied permission to organise a satyagraha outside Rajghat, the memorial of Mahatma Gandhi.

"It is very unfortunate that the Government of India has refused to give permission to us to stage a satyagraha. It is the same BJP which organised a protest on June 5, 2015, in support of Baba Ramdev in 2005," Maken said.

"If the principal opposition party in the country is not allowed to stage a satyagraha, then it amounts to murder of democracy. Where will democracy survive," Maken told PTI.