At tiranga rally in Srinagar, BJP targets Abdullahs and Muftis 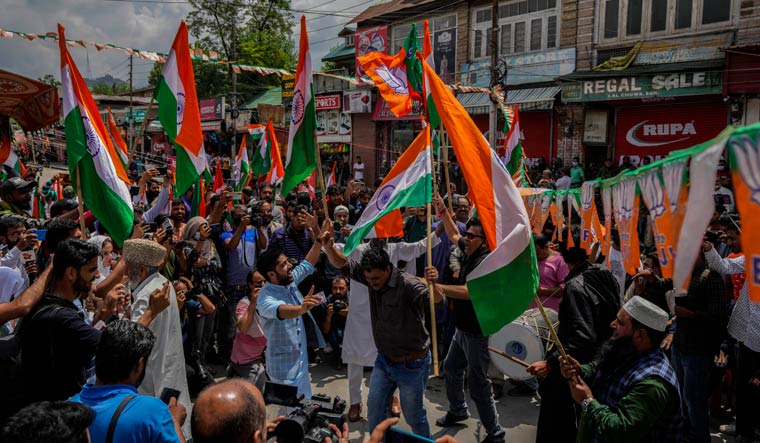 The BJP, on Monday, slammed the dynastic politics of Muftis and Abdullahs, during the first ever tiranga rally in Srinagar, held amid high security.

Party general secretary Tarun Chugh said the two families had turned Jammu and Kashmir into terrorism capital, but Prime Minister Narendra Modi turned it into tourism capital. The rally, in which 300 bikers took part, was flagged off by Chugh at Srinagar’s historic Lal Chowk. It will culminate at Kargil War Memorial on Tuesday, on the occasion of Vijay Diwas (July 26).

Security was beefed up in the wake of the event, and all roads leading to Ghanta Ghar (Clock Tower) at the Lal Chowk were sealed off. Most of the attendees were from BJP’s Yuva Morcha, who had come from different places of the country.

Taking a swipe at the Muftis and the Abdullahs, Chugh said the two families who ruled Jammu and Kashmir for 70 years, turned it into terrorism capital, but Modi turned it around and made it tourism and progress capital.

“Mehbooba Mufti had claimed that after abrogation of Article 370, no one will raise the tricolour in Jammu and Kashmir, let her visit the Lal Chowk and see how everyone has been carrying the tricolour, ” he said.

He said the two families were claiming that Article 370 cannot be abrogated, but PM Modi made it possible.

Chugh said the families joined hands and formed the Gupkar gang. The PDP and the NC are part of an alliance called People's Alliance for Gupkar Declaration which seeks the restoration of Article 370 and statehood to Jammu and Kashmir.

He claimed the country has rejected dynastic politics and said, “The youth have come forward for the progress of Jammu and Kashmir. The youth from different parts participated in the bike rally.”

Chugh said the assets of those who looted Jammu and Kashmir and failed to ensure its progress continue to rise.

The BJP leader said the rally is being organised to remember the sacrifices made during the Kargil war. “J&K has moved forward and cannot move ahead as per the aspirations of the dynasts.”

Ravinder Raina, BJP’s J&K president, while addressing the gathering, said the tiranga is "our identity and it belongs to everyone irrespective of religion, caste and creed."

Sunil Sharma, former J&K minister and BJP leader, said the BJP will have its own government in the Union territory.

Tejasvi Surya, national president of BJP Yuva Morcha, said for the first time after the abrogation of Article 370, such a rally was organised.