Murmu met lawmakers to seek support for the July 18 election 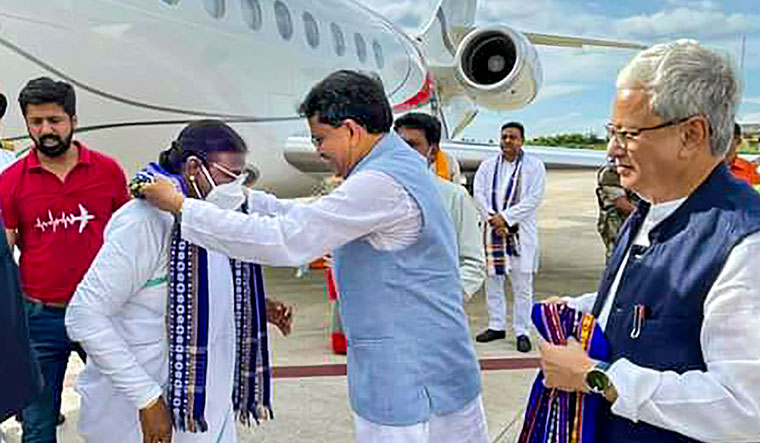 Murmu arrived in Guwahati in Assam on Tuesday night, and left for the day-long tour to the three states in the morning.

She was received by Chief Minister Pema Khandu, his deputy Chowna Mein, BJP state president Biyuram Wahge and other party functionaries at the Raj Bhavan helipad.

Murmu held a closed-door meeting with Lok Sabha MP Tapir Gao, Rajya Sabha member Nabam Rebia, the legislators of the BJP, NPP, and the JD(U), besides the three Independent MLAs.

BJP leaders said that Murmu, during the meeting, showered praises on the development works in the state and its vibrant culture, terming Arunachal Pradesh a "pious state" as it has several religious sites such as the Parshuram Kund and Bhismaknagar, where Lord Krishna is said to have married Rukmini.

Murmu then flew to Shillong in Meghalaya on a special aircraft along with those accompanying her.

She held a closed-door meeting with legislators of the different parties at a resort. She was also felicitated with traditional tribal clothes at the meeting.

Sangma said Murmu will represent a 'New India' as president.

"She represents hope for every tribal, every girl and every woman, and will carry with her the aspirations of small communities of India," he said.

"We are proud of her and wish her all the best for the upcoming presidential election," he said, adding that Meghalaya extends her all support.

Opposition TMC MLA HM Shangpliang also attended the meeting, and was seen clicking photographs with her.

She then went to Nagaland to meet legislators of the ruling United Democratic Alliance (UDA).

Rajya Sabha MP from the state Phangnon Konyak was also present during the meeting.

Speaking to reporters after the meeting, minister Neiba Kronu said, "All the legislators of UDA and the two MPs of the state are in consensus and they will unanimously support Murmu."

"She is from the tribal community, and a candidate for the highest post of the country. We are proud and we should all support her," he said.

Murmu will return to Guwahati in the night and meet the lawmakers of Assam on Thursday.

MPs and legislators of the ruling BJP, its allies the Asom Gana Parishad (AGP) and the United Peoples' Party Liberal (UPPL) will be present at the meeting. AIUDF chief Badruddin Ajmal said his party will also support Murmu.