Nine, including jan-militia members, arrested in Bastar; slapped with UAPA 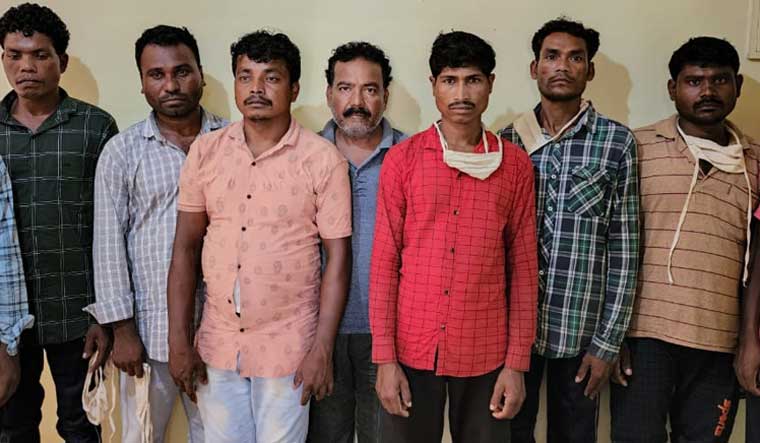 The Chhattisgarh Police have killed two Maoists in separate encounters in Sukma and Dantewada districts over the past 24 hours. The police also busted an explosives' supply network of Maoists in Bastar district on Friday, arrested nine persons and recovered a cache of explosives and related material.

A Bastar police team apprehended the nine persons at a check post on the Bastanar-Kaklur road under Kodenar police station area while they were allegedly engaged in exchange of explosive materials. A cache of explosives, including nine boosters (83 mm), two bundles of cordtex wire, 13 detonators, 31 exel wires fitted with detonators and safety fuses were recovered from them.

During the questioning, it was revealed that the explosives were meant for Maoists active in Bijapur district. The Maoists had contacted explosives’ suppliers Ujod Bedta of Kodenar and Krishna Prasad Sao of Bardhman district in West Bengal, and they had promised the delivery on the Kaklur road. The explosives were being handed over to a team, including Kosa Kawasi (jan-militia member), Rameshwar Pujari (supplier of explosives and other material to Maoists) and Anant Ram Jaiswal, Bal Singh Tamu (driver), Bablu Markam, Manglu Ram Kuhrami (both jan-militia members) and Maniram Ayatu—all residents of Jangla in Bijapur district.

All the nine persons were arrested, charged with relevant sections of UAPA and Explosives Act, produced in court and remanded to judicial custody, the police said. Apart from the explosive materials, a SUV and a motorcycle were also seized from the accused. Further probe is on to look at the previous criminal records of the accused, the police said.

Meanwhile, the District Reserve Guards (DRG) of the Chhattisgarh Police killed two Maoists – both carrying rewards of Rs 5 lakh each, in separate encounters in Sukma and Dantewada districts.

On Friday, the exchange of fire took place between DRG and Maoists near Borapara Jungle (Mankapal Camp, Gadiras police station) in Sukma. The body of a male Maoist has been recovered during searching and prima-facie identified as Kamlesh, Malenger Area Committee Member (Darbha Division of Communist Party of India-Maoist) who carried a reward of 5 lakhs, a police statement said.

On Friday afternoon, an encounter occurred between Dantewada DRG and Maoists of Katekalyan Area Committee in Nedanar jungle region.