At least 37 rebel MLAs, led by Eknath Shinde, are camping in a Guwahati hotel 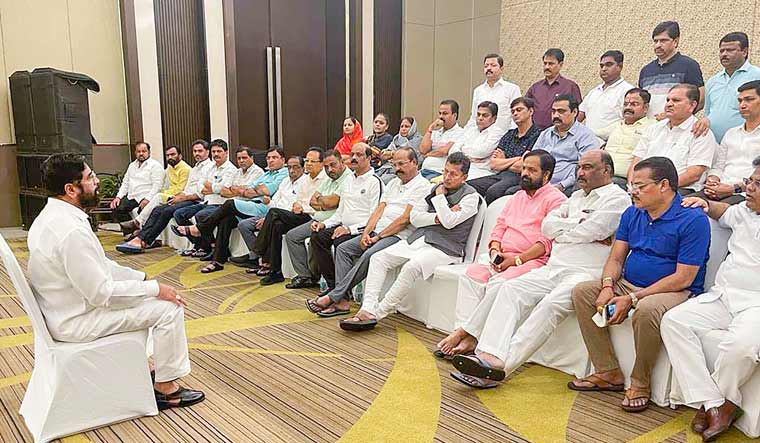 As the Maha Vikas Aghadi government in Maharashtra is exploring ways to tide over the political crisis in the state, the Shiv Sena is likely to request the Assembly Deputy Speaker to disqualify some of the rebel legislators who are camping at a luxury hotel in Guwahati.

NDTV, quoting government's legal team, reported that the application to disqualify 15 MLAs will be submitted on Thursday.

Earlier in the day, senior Sena leader Sanjay Raut had said the party is ready to consider the rebel MLAs' demands, including walking out of the ruling coalition, if they return to Mumbai in the next 24 hours.

"You say you are real Shiv Sainiks and will not quit the party. We are ready to consider your demand provided you come back to Mumbai within 24 hours and discuss the issue with CM Uddhav Thackeray. Your demand will be considered positively. Don't write letters on Twitter and WhatsApp," Raut had said.

Meanwhile, the Congress and the NCP extended support to Thackeray and exuded confidence that the government can prove its majority on the floor of the houe.

The three-party government is on the brink of collapse after senior Shiv Sena leader and cabinet minister Eknath Shinde raised a banner of revolt and left Mumbai with a sizable number of MLAs on Monday night soon after the results of the Maharashtra Legislative Council polls were announced.

Shinde first travelled to Surat and is currently camping in a Guwahati hotel along with with 37 rebel MLAs of the Sena and nine independents.