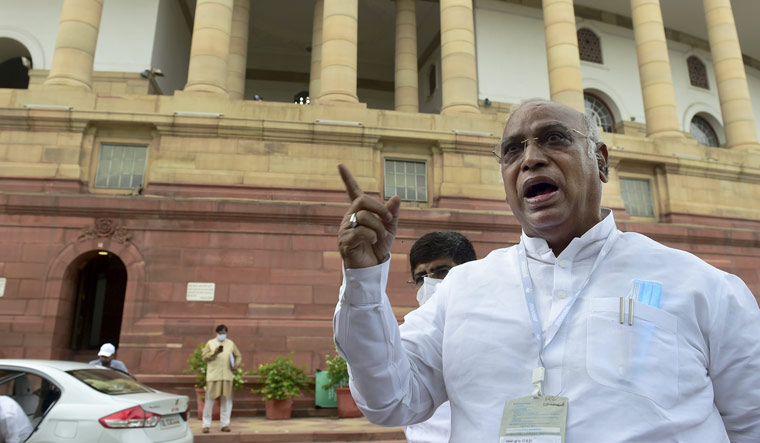 Amid the ongoing political crisis in Maharashtra, caused by the rebellion led by Shiv Sena leader Eknath Shinde, Congress claimed that the BJP and the Centre is responsible for "destabilising a stable government in Maharashtra."

Congress leader Mallikarjun Kharge claimed that the BJP is causing the crisis with the intention of forming their own government in the state, and pointed out that in the past, the saffron party did the same in Karnataka, Madhya Pradesh, and Goa as well.

I want to say that we all—the Congress, NCP, and Shiv Sena—will strengthen Maha Vikas Aghadi, he said.

"My party will stand with Maha Vikas Aghadi and we want to work together. The present Maharashtra govt is doing developmental work in the state," news agency ANI quoted Kharge as saying.

Maharashtra Congress chief Nana Patole affirmed his party's support to Shiv Sena to stop BJP from coming to power. "Congress is ready for floor test. We are with MVA and will (continue) to remain (so). If they (Shiv Sena) want to form an alliance with anyone, we don't have a problem," he said.

Party leader Prithviraj Chavan said he did not think Chief Minister Uddhav Thackeray would do an "about-turn" and agree to the rebel Shiv Sena MLAs' demand that the Sena pull out of the ruling MVA alliance. Chavan was reacting to Sena MP Sanjay Raut's statement earlier in the day that the Sena was "ready to consider" the demand of the MLAs led by Shinde that it should end the Maha Vikas Aghadi alliance with the NCP and Congress.