A 'national party' has assured us all help, says Eknath Shinde

Shinde is currently camping with 37 rebel Sena MLAs in Guwahati 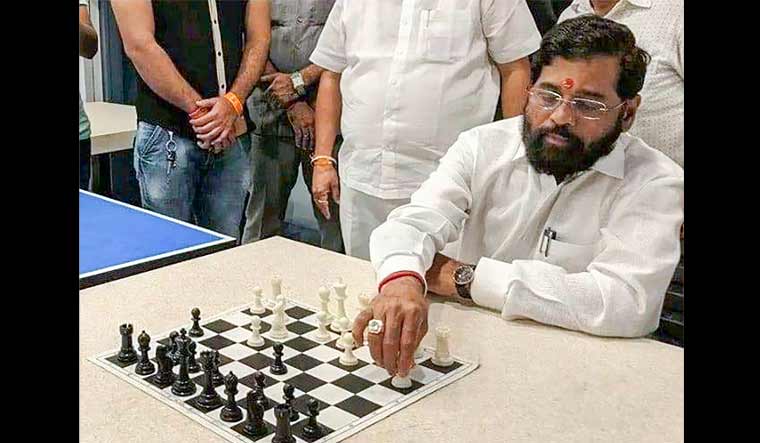 Rebel Shiv Sena leader Eknath Shinde plays chess at a hotel where he is staying with supporting MLAs, in Guwahati | PTI

Shiv Sena leader Eknath Shinde, whose rebellion against the party has pushed the three-party Maha Vikas Aghadi (MVA) government to the brink of collapse, said a "national party" has termed their revolt as "historic" and assured to provide all help to them.

A video of Shinde addressing the group of rebel Sena legislators at a Guwahati hotel was released by his office here. The video also showed the legislators unanimously authorising Shinde to take further decision on their behalf as their group leader.

In the video, Shinde is seen saying, "Our worries and happiness are the same. We are united and victory will be ours. There is a national party, a 'mahashakti'...you know they vanquished Pakistan. That party has said that we have taken a historic decision and assured to provide all help."

Shinde is currently camping with 37 rebel MLAs of the Sena and nine independents in Guwahati. The NCP and Congress also share power in the Uddhav Thackeray-led dispensation.

A statement issued by Shinde's office said the decision to authorise him to take decision on their behalf was taken unanimously.

Meanwhile, talking to reporters in Mumbai, Ajit Pawar, when asked if the opposition BJP had a role to play in the ongoing political crisis in the state, said, "So far, no top BJP leader has been seen in the forefront."

State NCP chief Jayant Patil said the MVA continues to enjoy majority. "The rebels haven't quit the Shiv Sena. They are sulking right now and will return," he said.