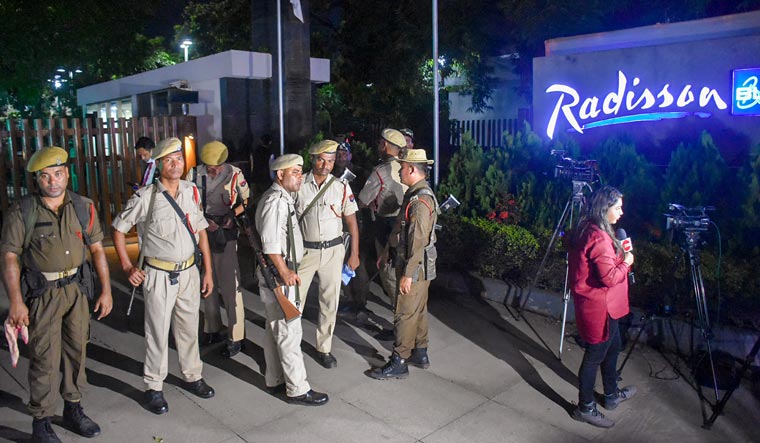 A posse of hawk-eyed security personnel stood guard outside the luxury hotel in Guwahati, where a group of dissident Shiv Sena MLAs from Maharashtra have put up following their arrival in the city on Wednesday morning, turning the upscale property into an impenetrable fortress.

Entry of common people into Radisson Blu hotel has almost been barred for now, with the Guwahati police taking over the security from its private guards.

Apart from personnel from nearby Jalukbari police station, dozens of jawans from reserve battalions and commando units of the Assam Police are keeping a tight vigil on the hotel, which is around 15 km from Lokpriya Gopinath Bordoloi International (LGBI) Airport.

In what seems to be an apparent bid to topple the Maha Vikas Aghadi government (MVA) in Maharashtra, dissident legislators of Shiv Sena, which heads the ruling coalition, left for Surat on Tuesday, where they had camped for the day, before flying to Guwahati in a chartered aircraft.

The MLAs, led by minister Eknath Shinde, were received by BJP MP Pallab Lochan Das and MLA Sushanta Borgohain at the airport earlier on Wednesday.

One of the MLAs, Nitin Deshmukh, along with five partymen, however, is learned to have returned to Maharashtra within hours of arriving in Assam.

A source in the BJP, of which Shiv Sena is a former ally, said that the decision to shift the legislators to Guwahati was taken on security grounds.

Outside the plush hotel, at Gotanagar on the outskirts of the city, traffic policemen were seen busy ensuring a hassle-free vehicular movement on the road adjoining the five-star property.

Security personnel, under the presence of senior officials, were checking on every guest before allowing them entry into Radisson Blu, and the ones without a reservation were asked to return.

Mediapersons in hordes waited outside the hotel, even as the police stayed tight-lipped over the queries made by them, while also thwarting them from taking a peek into the development inside.

This is perhaps the first time MLAs from a western state were flown to a northeastern state, following their rebellion against the party leadership.

Shinde, who had initially refused to talk to mediapersons waiting outside the airport, later said he has "the support of 40 MLAs".

The exact number of rebel MLAs that moved to Guwahati could not be confirmed but the flight had 89 passengers, including onboard crew, sources said.