Another chartered plane with four Maharashtra MLAs arrives in Guwahati 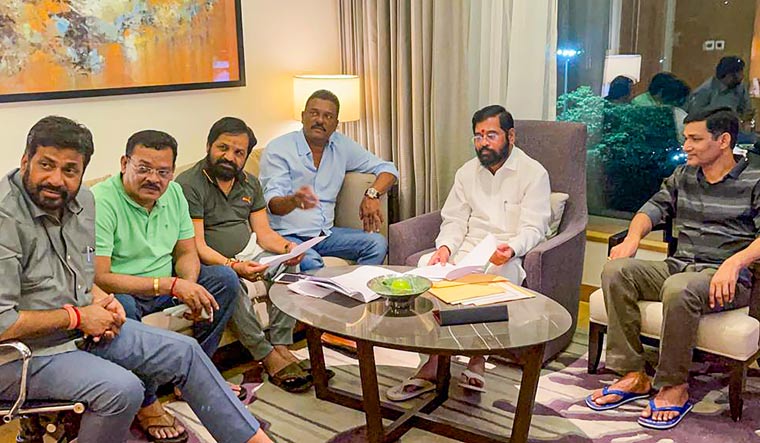 Another chartered plane with four MLAs from Maharashtra arrived in Guwahati on Wednesday to join the rebel Shiv Sena legislators who reached the city earlier in the day, sources said.

The four MLAs—Chandrakant Patil, Yogesh Kadam, Manjula Gavit and Gulabrao Patil —arrived in the evening from Surat in Gujarat like the legislators who came here along with Maharashtra minister Eknath Shinde in the morning.

The four MLAs arrived in Surat in the afternoon and went straight to the airport following a brief stay at a hotel.

They were taken to a city hotel where the other MLAs are camping.

While Gavit and Chandrakant Patil are Independent MLAs, Kadam and Gulabrao Patil are Shiv Sena legislators.

The four MLAs arrived in Surat on Wednesday and subsequently, flew to Guwahati, the sources said.

Gulabrao Patil is the water supply and sanitation minister in the Uddhav Thackeray-led Maharashtra government. He is the second cabinet minister to have joined Shinde after Horticulture Minister Sandipal Bhumre.

A group of rebel Maharashtra MLAs, led by Shinde, was flown to Guwahati on Wednesday morning.

They were taken to Surat from Mumbai on Tuesday and in the early hours of Wednesday, they were shifted to Guwahati.

One of the MLAs—Nitin Deshmukh—who had arrived in the morning, left Guwahati a few hours later for Nagpur in a chartered flight.

Deshmukh later said he was with Shiv Sena chief Thackeray.