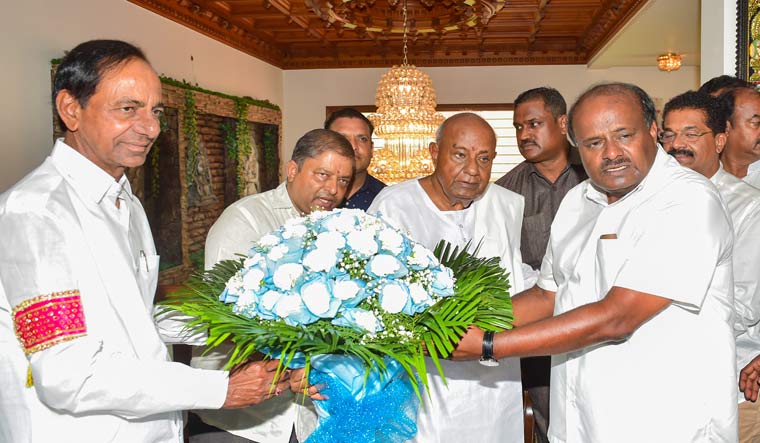 Telangana Chief Minister K. Chandrasekhar Rao on Thursday dropped enough hints at the formation of a grand alliance ahead of the 2024 Lok Sabha elections as he said there will be some sensational news in the next two to three months. Speaking to reporters in Bengaluru after meeting JD(U) supremo and former prime minister H.D. Deve Gowda, Rao also launched a scathing attack on the BJP-led government at the Centre.

"Lots of talks happen but now India will change. India has to change and take a shape for future. It has to rise despite politics, politicians and 'isms'. Efforts should be made to change the situation of the country. After two to three months, you will get to see some sensational news," he said.

The Telangana Rashtra Samiti chief said he discussed the political situation in Karnataka and at the national level during his meeting with Gowda.

Rao took a dig at Prime Minister Narendra Modi and said despite 'bhaashanbaazi' (rhetoric), industries are closing down, the nation's GDP is crashing and the rupee is falling drastically compared to the US dollar. The country has enough resources, yet it is suffering due to shortage of water, electricity and irrigation even after 75 years of independence while many nations that secured freedom along with India are way ahead of the country, he said.

"Every effort should be made to build a bright India. I appeal to the journalists to contribute in this pursuit as their contribution is needed," the chief minister said.

Addressing media, Kumaraswamy also said there will be some “good news” in the next two to three months. The former CM said Rao held discussion with Gowda for about 2-3 hours and the two leaders discussed various issues prevailing in the country.

Rao flew to Bengaluru in the morning, just hours ahead of Prime Minister Narendra Modi's arrival in Hyderabad. This is the second time in the last four months that KCR has avoided a meeting with Modi during the latter's visit to Telangana. In February, Modi had visited Hyderabad to unveil the Statue of Equality—a giant statue of Saint Ramanujacharya. KCR gave the event a miss citing health reasons.

KCR, who has been on a national political tour for the last few weeks in an attempt to garner support of the non-BJP parties, has been vociferous against the Centre over a number of issues. Earlier this month, he met Delhi Chief Minister Arvind Kejriwal and their Punjab counterpart Bhagwant Singh Mann and offered financial assistance to families of farmers who laid down their lives during the nationwide farmers' agitation against the then contentious farm laws. KCR also met Samajwadi Party chief Akhilesh Yadav.