Thunderstorm kills 3 in MP's Satna; 32 stranded on Maihar ropeway for an hour 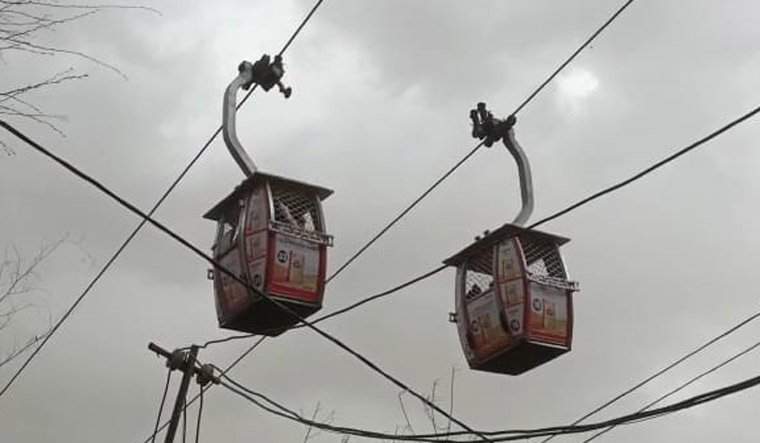 Around 28 devotees got stranded on a ropeway to Maihar temple in Satna district of Madhya Pradesh for an hour due to high velocity winds.

A major tragedy was averted as around 32 devotees got stranded on a ropeway to Maihar temple in the district for close to an hour amidst high velocity winds.

The weather office has warned of thunderstorms and hailstorms in several parts of the state later in the evening and asked citizens to take precautions against lightning. High velocity winds also struck Rewa, Katni, Panna and Umaria in the afternoon. Light rainfall was also reported from many places.

A big scare was sounded in Maihar, about 40kms from district headquarters, where devotees on the way to Maa Sharda Shakti Peeth in Trikut hills got stranded in ropeway cable cars.

While local sources claimed that the devotees in eight cable cars remained stranded between 40 minutes to an hour, District Collector Anurag Verma told THE WEEK that they were brought down by manual operation within 15-20 minutes. He said the alarms ring when the wind velocity is over 40 km per hour and the cable cars were stopped. They were then manually brought down to avoid any risk.

Around 28 devotees got stranded on a ropeway to Maihar temple in #Satna district of #MadhyaPradesh for an hour due to high velocity #winds pic.twitter.com/cZ7EgitsSu

Videos of the cable cars dangling dangerously with the wind went viral on social media. The stranded devotees blamed the management of the ropeway for not taking due precaution for stopping the ropeway operation despite the high velocity winds.

This is the second incident of devotees getting stranded on Maihar ropeway within seven months. In October 2021, devotees had got stranded for a considerable time due to technical fault on the ropeway.

Meanwhile, three persons including two girls were killed in incidents related to thunderstorms in the district. Five others were injured, sources said. Two girls—Seema Kol, 15 and Manisha Kol, 18—were killed in village Dhatua in Amarpatan when a tree under which they had taken shelter from high velocity winds and rain, collapsed. Four others standing under the same tree were injured and sent to hospital for treatment. The deceased and injured were all residents of village Sadar.

In the second incident in Satna city, Gudda Yadav, a resident of Kakarhati in neighbouring Panna district was killed as a parapet of a house under which he had taken shelter collapsed in Bhaiyakhana locality under the city Kotwali police station.

The Regional Meteorological Centre, in a Nowcast bulletin for Monday evening warned of rain, hail, lightning and gusty dust carrying winds up to 90 km per hour in velocity for eastern districts like Mandla, Balaghat, Sidhi, Singrauli, Dindori and Anuppur.

Winds of up to 60 kmph with light rain and lightning were warned for Rajgarh, Guna, Sheopur Kalan, Shivpuri, Bhind, Panna, Umaria, Seoni, Satna and Rewa districts. Light rain and dusty winds with lightning was possible in many other districts, the MeT office warned.