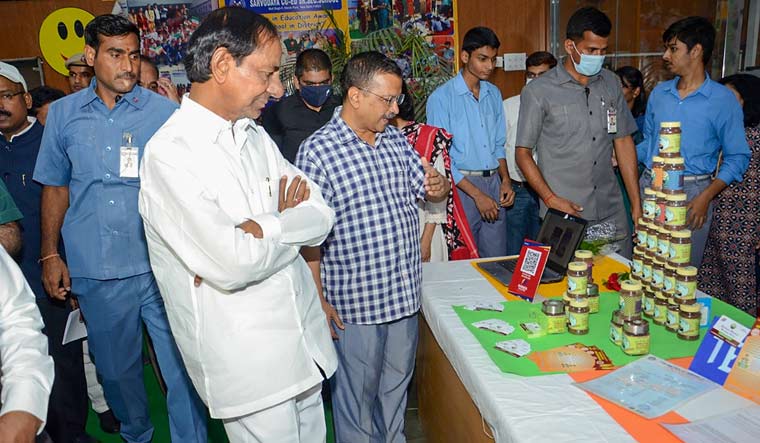 Telangana Chief Minister K. Chandrashekar Rao on Saturday said his government will set up model schools in the southern state on the lines of Delhi, and will soon send a team of officers for coordination.

Rao, along with his Delhi counterpart Arvind Kejriwal, visited a Delhi government school in the national capital where officials briefed the Telangana chief minister on the change in the education system in the city under the AAP government.

Rao and his party leaders were welcomed by Kejriwal and his deputy, Manish Sisodia, at the Sarvodaya Vidyalaya Senior Secondary School in the Moti Bagh area and given a tour of the school.

The delegation visited classrooms, labs and the students' playing area among other facilities.

Praising Delhi's public education system, Rao said, "The process of turning into job providers rather than job seekers is very good. This is very necessary for our country with such a large population."

"We will implement the Delhi model of schools in Telangana as well. We will soon send a team of officers from our state to coordinate," he told reporters.

Later, a statement issued by the Delhi government quoted Rao as saying that the Kejriwal government's policies in healthcare and education were genuinely outstanding, and citizens of Delhi were "truly fortunate" to be receiving such spectacular services.

"This should be implemented all over India. If the kind of governance offered by the Kejriwal government in Delhi takes place all over the country, India will progress like never before. This kind of development is not seen usually in India," the statement quoted KCR as saying.

Addressing the media, Kejriwal said the Telangana chief minister came to Delhi and visited a school where he saw the facilities in place, which is a "matter of pride for us".

"We heartily welcome him (KCR) and his MPs who have come to see a Delhi government school. He showed keen interest and asked about each detail of the school. It is good to see his deep interest in education," the Delhi chief minister told reporters.

Briefing Rao about the Delhi government's "remarkable improvements" in education, Kejriwal said many private school students were taking admission in government schools because of the quality of education being imparted.

"We have around 1,100 schools and nearly 18 lakh students studying in them. Earlier, this number was 16 lakh, but now, due to remarkable improvements in the education sector, many students of private schools are joining our government schools," Kejriwal told Rao.

The Telangana chief minister said he also discussed political developments with Kejriwal, as well as with Samajwadi Party chief Akhilesh Yadav earlier in the day.

Later, the Telangana chief minister visited a Mohalla clinic in Mohammadpur in the national capital.

On the central government's new education policy, Rao said, "The central government should not simply formulate a new education policy and impose it on everyone. They should keep in mind that we are a federal democracy the Constitution clearly says that India is a Union of States, and take everyone along in order to formulate a successful policy."

"If it goes ahead without any consultation with the states, there are bound to be differences and obstacles in the future," he said in the statement issued by the Delhi government.

Kejriwal took to Twitter to share about KCR's visit to the government school and the mohalla clinic.

"Visited world-class Mohalla Clinics and schools of the Delhi Government with @TelanganaCMO Shri K Chandrashekhar Rao ji. He was very happy to see all the facilities. India will only progress if we learn from the good work of each other," he tweeted.

Rao also met with journalist and writer Prannoy Roy at the chief minister's official residence on Tughlaq Road here, and discussed with him political developments and economic issues in the country.

Rao is in Delhi as part of his week-long nation tour to attend national-level political and social programmes.