'Who are you?': SC questions locus of Hindu NGO office bearer

"I am a devotee," says the petitioner 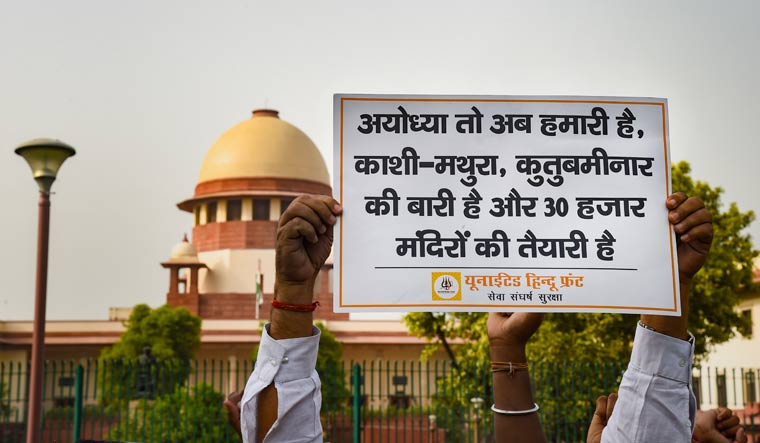 The Supreme Court Tuesday questioned the locus of an office-bearer of a Hindu organisation who has moved a plea seeking to intervene and oppose the petition of the Gyanvapi mosque committee of Varanasi challenging the survey of the Gyanvapi-Shringar Gauri complex.

Who are you, a bench of Justices D Y Chandrachud and P S Narasimhathe asked, adding that in a civil lawsuit there was hardly any scope for such an intervention.

Lawyer Barun Kumar Sinha, appearing for Vishnu Gupta, the president of NGO Hindu Sena, said 'I am a devotee'.

However, the bench told the lawyer You must know that it is a civil suit and there is no role of an intervenor.

That Hindu culture and civilization have been victims of foreigners. The fact is corroborated by the fact that temples in this country have been converted into a mosque by Muslim Invaders right from Khilji dynasty up to Mughal dynasty, it said.

On the other hand, the Committee of Management Anjuman Intezamia Masjid which manages Gyanvapi mosque in Varanasi has referred to the provisions of the Act and its Section 4 to argue that they barred the filing of any suit or initiating any other legal proceeding for a conversion of the religious character of any place of worship, as existing on August 15, 1947.

The Muslim party has been saying that the place has been used as a mosque since time immemorial.

The bench has issued notices to the petitioner Hindu devotees and posted the plea of the mosque committee for hearing on May 19.

The apex court also directed the District Magistrate of Varanasi to ensure protection of area inside the complex where 'Shivling' is said to be found in the survey and allowed Muslims to offer Namaz' and perform religious observances.