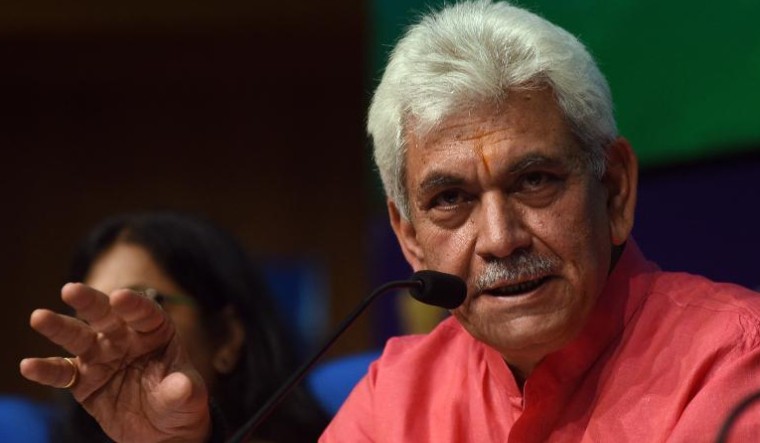 Jammu and Kashmir Lieutenant Governor Manoj Sinha, on Sunday, ordered an inquiry into the use of force against Kashmiri Pandit employees during a protest against the killing of minority community member Rahul Bhat by terrorists.

The LG also directed the Jammu Kashmir Police to ensure foolproof security for the PM package employees working across the valley.

Protests were held at several places in Jammu and Kashmir on Friday against Bhat's killing as well as the administration's failure to provide security to Kashmiri Pandit employees. Police used batons and tear gas shells to quell a protest at Sheikhpora in Budgam.

Bhat was gunned down by terrorists inside the Tehsil office in Chadoora town on May 12. He had got the job of a clerk under the special employment package for migrants in 2010-11.

The government has ordered an inquiry into Bhat's killing and a Special Investigation Team (SIT) has been constituted.

"Bhat's murder was a targeted killing and an attempt has been made to create an atmosphere of fear and terror. He was a very good employee. We have constituted an SIT over the issue. The SHO has been attached. The SIT will investigate all the angles," Sinha said.

The SIT will also inquire into the use of force against the protesters, he said.

He added that he has told the administration that there is no need to use force.

The LG said the other grievances of Kashmiri Pandits will also be looked into.

"We understand their pain and difficulties," Sinha said, adding that the administration will make arrangements for the security of the minority community members wherever they live.

Sinha said some people are trying to disturb peace in Kashmir and appealed to political parties and common people to remain united.

"Some people are trying to disturb the atmosphere, but I want to tell them that their attempts will not succeed. Two foreign terrorists involved in the incident (Bhat's killing) have been killed and the police are after the others," he said.

"I appeal to all the political parties to issue an appeal for social boycott of such elements involved in these incidents (killings)," Sinha said.

Security forces on Friday killed two Lashkar-e-Taiba terrorists, who were behind the killing of Bhat, in Brar in Bandipora district's Aragam area.

A press release issued by the Raj Bhawan quoted Sinha as saying that the administration has taken necessary steps to ensure the welfare and security of the PM package employees and all their concerns will be addressed in a time-bound manner.

He made these remarks during a meeting with a BJP delegation.

Sinha said all the PM package employees will be posted in secure district and tehsil headquarters and the Jammu and Kashmir Police will ensure their security and that of their family members.

"It is a very sensitive and emotional moment for the entire administration and the nation, and we must stand united in the fight against terror. Two terrorists involved in the attack have been killed. We have given full freedom to the security forces and the remaining (terrorists) will be eliminated soon. Let me assure you, those behind plotting the attack and their supporters will be punished soon," he said.

The LG has also constituted a special cell for the PM package employees within the LG Secretariat and Additional Secretary Akshay Labroo will be the nodal officer, the Raj Bhawan statement said.

The special cell will handle the grievances of the PM package employees and it will coordinate with district administrations and other concerned departments to ensure that their grievances are resolved at the earliest, it said.

The nodal officer will hold regular meetings with these employees as part of this initiative, it said.