Congress wants to reclaim nationalism plank from BJP, but is confused on how to

There are suggestions for setting up a new intellectual team 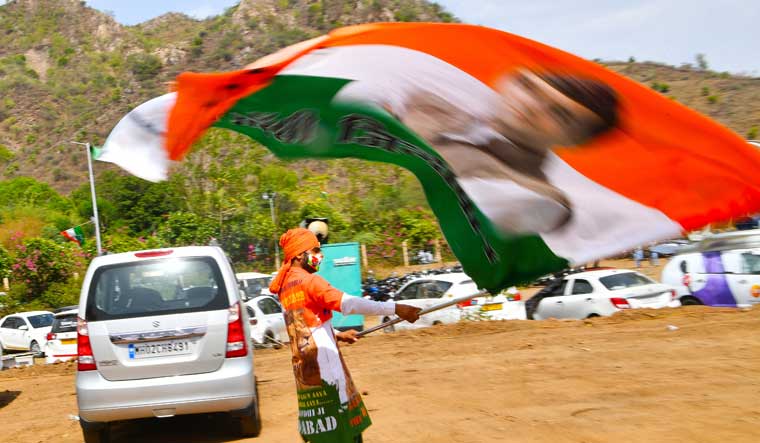 Congress leaders attending the Chintan Shivir—the party's brainstorming meet—in Udaipur are focusing on the need to take urgent steps like opening better communication links with the people in line with the changing times, arresting the communal polarisation and galvanising the party at the local level to enable it to make a comeback in electoral politics.

But ultimately, what worries the Congress leaders most is how to recapture from the BJP the aura of nationalism, which had been once identified with Congress since the time of the Independence struggle.

This disillusionment was palpable in the words of senior leader Mallikarjun Kharge on the sidelines of the Chintan Shivir. “We led the fight for Independence. We launched the Quit India movement and suffered oppression from the British. But those who did not do anything then are now questioning the credentials of Congress in its commitment to national values and preaching to us about nationalism,” Kharge said.

Congress president Sonia Gandhi said an attempt was being made to distort history by defaming the great Congress stalwarts such as Jawaharlal Nehru.

The Congress leaders view the alleged communal polarisation led by the BJP as something that went against the entire nation. But they are peeved at the fact that the Congress is all alone in defending its case when its nationalist credentials are questioned.

Though the party is well aware of the areas where it has gone wrong in the last many years, there is still confusion over how to correct it. The Congress leadership has now understood that the party should use social media more effectively.

The party's predicament is that many times it is not able to take out campaigns that it deems correct, The problem is that it does not have a proper counter plan to resist the BJP campaign.

The Congress claims to be interacting more with the media and the public, But in reality, more than the Congress' campaigns, people get attracted to the BJP's narrative on major issues.

The point is how the Congress is planning to make changes in its intellectual orientation. The party thinks that a solution to each issue related to practical politics can be found by undertaking organisational restructuring. But this is not the case when the party is cornered intellectually on issues like nationalism.

The Congress party's narrative on nationalism is being questioned vigorously. To overcome this challenge, there are suggestions for setting up a new intellectual team for the party to formulate policy on major national issues.

(This article was first published on onmanorama.)