Congress' 'Nav Sankalp' is to go back to people 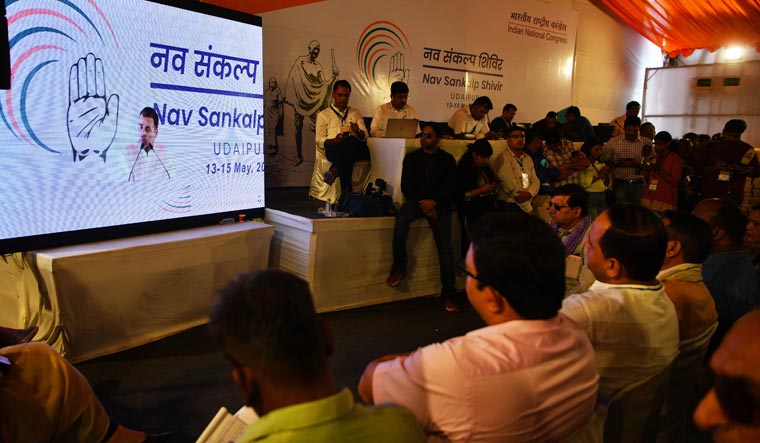 Emphasising on the need to reestablish its connect with people and positioning itself as primary counter to the allegedly divisive politics of the BJP-RSS, the Congress decided to set out on a 'Bharat Jodo Yatra' starting from October 2, on Gandhi Jayanti.

The yatra, to be taken out from Kanyakumari to Kashmir, is in sync in with the slogan of 'Bharat Jodo' unveiled as the main outcome of the three-day Nav Sankalp Shivir of the Congress in Udaipur that came to an end this evening.

In her closing remarks, Congress president Sonia Gandhi said the yatra will see the participation of all party leaders. “The yatra is to strengthen the bonds of social harmony that are under stress, to preserve the foundational values of our Constitution that are under assault and to highlight the day-to-day concerns of crores of our people.”

Sonia announced that phase two of the district-level 'Jan Jagran Abhiyan' that had been launched earlier will resume from June 15. The campaign will seek to highlight economic issues, especially the growing unemployment and price rise.

The need to reconnect with the masses and stir up a mass mobilisation on issues that resonate with the people were discussed in the six different breakout groups of party leaders that brainstormed on issues under different heads to recommend measures to place the party in revival mode.

Rahul Gandhi too highlighted in his speech at the concluding session of the Chintan Shivir the need to go back to the people and reestablish the party's connect with the masses.

“There is no shortcut to it. It can only be done through blood and sweat....We must have a mass contact programme. All of us will go to the people, and we will do it not for one or two days but will sustain the movement for months to listen to what the people of India have to say,” he said.

Projecting the Congress as the principal ideological counter to the BJP, he said a major purpose of the initiative to go back to the people is to warn them against the destruction that can be brought about by the “divisive politics” of the BJP-RSS.

“I had warned about Covid-19. I am warning you again that the manner in which institutions are being weakened and people are being divided in the name of community and caste and the conversation between them is being ended, in the coming times, India will be up in flames,” he said.

Sonia said the summary of the discussions in Udaipur will inform the Congress' party position on issues, its policies and programmes, and will also be of value in preparing manifestos for state and national elections.