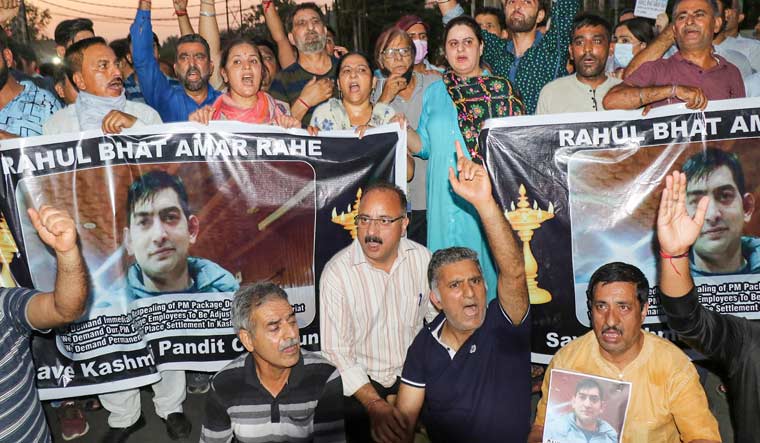 Kashmiri Pandits protest over the killing of Rahul Bhat, in Jammu | PTI

The migrant Kashmir Pandits working in different government departments in Kashmir under prime minister’s employment package have sent a resignation letter to Jammu and Kashmir Lieutenant Governor. The copies of the letter have also been sent to the ministry of home affairs and prime minister's office.

The decision to resign en masse from government jobs was announced by protesting migrant Kashmiri Pandits in the wake of the killing of Rahul Bhat, a migrant Kashmiri Pandit, who was fired at by militants at the Revenue Department’s office Tehsil office at Chadoora in Budgam district on Thursday. He was rushed to the hospital where he succumbed.

Bhat had secured employment in Kashmir under prime minister’s employment package. He is survived by wife and a five-year-old daughter.

Bhat‘s killing evoked widespread condemnation from political leaders and members of the civil society in Kashmir.

The J&K government has provided jobs to a few thousand migrant Kashmiri Pandits in Kashmir in different departments. The government has created secured colonies for them at several places like Sheikhpura in Budgam, where Bhat was living with family. Such colonies have also been built at Haal in Pulwama, Mattan and Vesu in south Kashmir.

After Bhat’s killing, migrant Pandits working in Kashmir staged protests at several places in Kashmir and also blocked the Srinagar-Jammu national highway to register their anger.

On Saturday, they tried to march towards Srinagar International Airport in protest against J&K L.G. Manoj Shina not visiting the residence of Bhat.

The J&K Police fired smoke shell and resorted to cane charge to prevent Kashmir Pandits from marching towards the airport. The protesters reportedly pelted stones. However, the situation was brought under control quickly.

The protesters said they want the LG to assure them of security and ensure that the culprits involved in the killings are punished. One of the protesters said since the LG didn’t arrive to meet them, they were compelled to take out a protest towards the airport.

BJP state president visited Sheikhpora on Friday to condole the killing of Bhat. Angry residents mobbed him and asked him if the BJP too had failed to protect the lives of Kashmiri Pandits. Some members asked Raina to ensure their return to Jammu because of the threat in Kashmir. Others said the government should stop using Kashmiri Pandits as sacrificial lambs.

Raina told the gathering that the government will ensure their security and the perpetrators involved in the incident will be punished. “Our security forces have traced and killed all such Pakistan-sponsored militants in the past and they will do it again,’’ he said. “We will not spare them.”

Meanwhile, the PDP has appealed to imams of the mosque to lay stress on brotherhood between people of different faiths in Kashmir in their Friday sermons. She said the people should ensure the safety of minorities like they did in 1947. Party chief Mehbooba Mufti said at a time when the Central government to hide its failure is trying to pit Muslims and Hindus against each other, Jammu and Kashmir is the only place where people of different faiths are still living peacefully.

“The way people of Kashmir protect the lives of the minorities 1947, the same spirit should be shown again by the majority for minorities in Kashmir so that brotherhood is maintained,’’ she said.