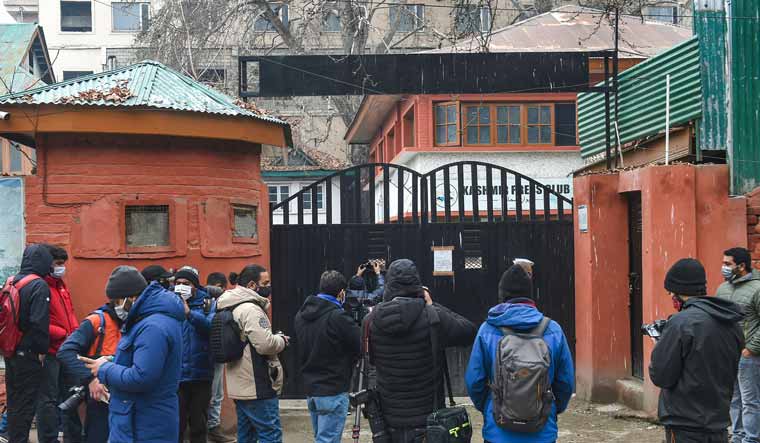 The Jammu and Kashmir administration on Monday cancelled the allotment of premises to the Kashmir Press Club at Polo View in Srinagar and handed the KPC building to the estates department.

The development comes two days after a group of journalists seized control of the KPC and declared themselves an interim body to manage the club.

After seizing control of the club, the group of 11, led by senior journalist M. Salim Pandit, in a message issued through the official WhatsApp group and email of the Club said, “Various journalist organisations across Kashmir valley unanimously decided to form an interim body of three members with M. Salim Pandit as president, Zulfikar Majid, bureau chief of Deccan Herald, as general secretary and Arshid Rasool, editor of Daily Gadyal, as treasurer of the club till elections are held in free and fair manner.”

The statement said allowing a few disgruntled elements to hoodwink the club constitution and bylaws, and flout all norms of law, has set a wrong and dangerous precedent.

Elections to appoint a new management body of the club were scheduled for August 2021. However, due to the delay in the re-registration in view of changed status of J&K from a state to a Union Territory and clearance from the J&K Police’s CID, the holding of elections was delayed.

After the CID clearance, the managing body said fresh elections would be held in February. However, soon after the announcement of dates for fresh elections, the CID clearance was put in abeyance by the authorities. In a joint statement, various journalist bodies reacted sharply to the takeover of the club in what some called a “military style coup”.

In a statement, the government said it has decided to cancel the allotment of the building to the de-registered KPC due to concerns over the emergent situation that has arisen due to the unpleasant turn of events involving two rival warring groups using the banner of the KPC.

“The factual position is that the KPC as a registered body has ceased to exist and its managing body too has come to a legal closure on July 14, 2021, the date on which its tenure came to an end,” read the government statement.

“In its failure to register itself under the central Societies of Registration Act, further compounded by its failure to hold elections to constitute a new managing body, some individuals of the erstwhile club have been committing illegalities on several counts, least of which are false portrayal of being owner-managers of an entity which is no longer in legal vogue.

It said that some other members have created an interim body using the same banner suggesting a ‘takeover’.

It said since the original KPC itself has ceased to exist as a registered body, the question of any interim body is rendered infructuous. In these circumstances, issuing of notices and communication by any group using the rubric of erstwhile KPC is illegal. It said it also hopes that a duly registered bona fide society of all journalists shall be constituted as soon as possible and the same shall be able to approach the government for reallocation of the premises.

The government added that in view of this aspect of the dispute and in view of the reports in social media and other sources indicating a potential law and order situation including a threat of breach of peace and the safety of bonafide journalists, an intervention was necessary.

“In view of the unpleasant developments and dissensions between various groups of journalists, it has been decided that the allotment of the premises at Polo View in view of the now de-registered Kashmir Press Club be cancelled and control of land and buildings situated at Polo View Srinagar which belongs to the Estates Department be reverted back to said department,’’ it said.

“The government is committed to a free and fair press and believes that journalists are entitled to all facilities, including a place for professional, educational, social, cultural, recreational and welfare activities. It also hopes that a duly registered bona fide society of all journalists shall be constituted as soon as possible and the same shall be able to approach the government for reallocation of the premises.”