BJP faces a problem of anti-incumbency in Uttarakhand 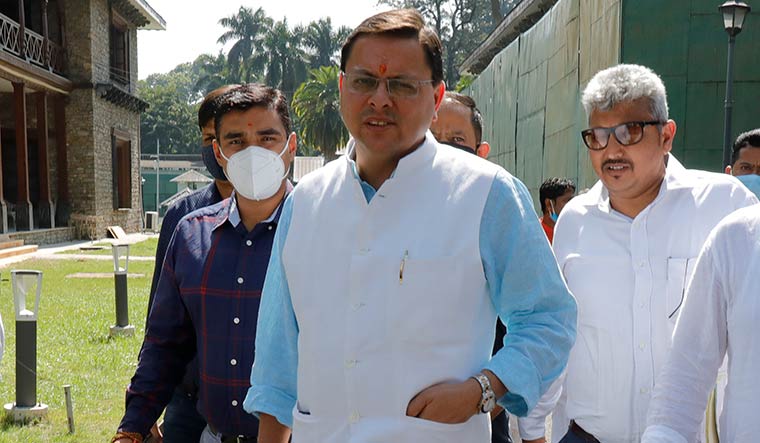 Helmed by Chief Minister Pushkar Singh Dhami, the BJP Uttarakhand core group meeting will be held today in Delhi. Union Home Minister Amit Shah will be present, along with party president J.P. Nadda and others.

The political upheavals in Uttarakhand have always outstripped the size of the state, and have become only bigger in the year before the state gears up to elect its fifth government.

In July last year, Pushkar Singh Dhami became the third chief minister of the state’s fourth assembly. In 2017, Dhami’s party, the BJP, won an unprecedented majority—56 of the 70 assembly seats—in Uttarakhand. It had 46.51 per cent of the vote share—substantially more than that of its closest rival, the Congress, which got 33.49 per cent. This majority, however, brought no stability in a state where most chief ministers are believed to be jinxed as they do not complete their terms.

Trivendra Singh Rawat, the first chief minister of the fourth assembly, served for four years till he was removed in March 2021. Rawat maintains that he does not know the reason for his removal, but party members say he was unapproachable and that his public image was unimpressive. In came Tirath Singh Rawat, who served four months of gaffes, relied overtly on the bureaucracy and was unable to gain the confidence of the central leadership.

A choice then had to be made of a candidate who was already a member of the assembly, and had an image acceptable to the party leadership. Pushkar Singh Dhami, with his roots in student politics, was this man. He had earlier served as officer on special duty to Bhagat Singh Koshyari (second chief minister of Uttarakhand) and thus knew his way around the bureaucratic tangle of the top post.

The pleasant and affable Dhami has soothed ruffled feathers within the party. One BJP worker described the atmosphere in the party as “very positive” after his appointment.

Dhami, however, bears a mammoth burden. He must undo the perceived failures of the first Rawat and the howlers of the second Rawat. He comes too close to the elections for major course corrections. Then there is the matter of his own image—he is not well known across the state, like say a Harish Rawat (chief minister in the previous Congress government). There are already reports of others vying for his job—among them most notably Anil Baluni, BJP national spokesperson.