Three other BJP MLAs announced their resignation from the party 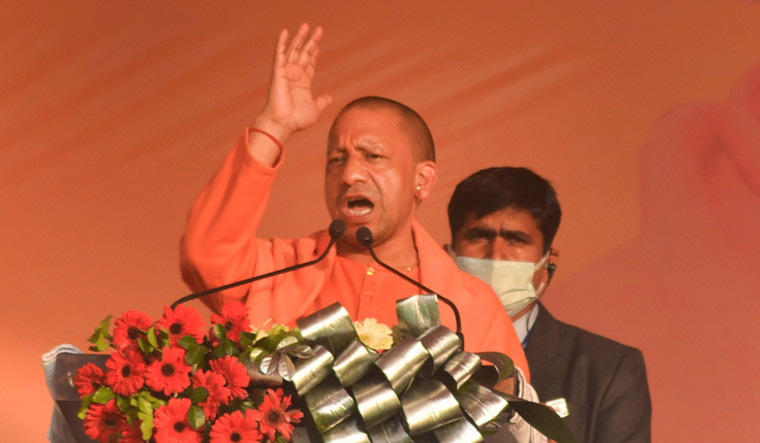 In another jolt to the ruling BJP in poll-bound Uttar Pradesh, OBC leader Dara Singh Chauhan resigned Wednesday from the Yogi Adityanath cabinet and appeared to be headed towards the Samajwadi Party.

A day earlier, as BJP leaders brainstormed in Delhi on the UP assembly polls, Swami Prasad Maurya, also a prominent Other Backward Class leader, had quit the state cabinet.

Three other BJP MLAs announced their resignation from the party, seemingly in Maurya's support.

Yet another BJP MLA, Avtar Singh Bhadana, quit the party on Wednesday and is joining the Rashtriya Lok Dal, an SP ally.

But two Uttar Pradesh MLAs  Naresh Saini from the Congress and Hari Om Yadav from the SP  joined the BJP on Wednesday, a welcome development for the ruling party as it deals with the sudden defections from its ranks.

A Sultanpur court, meanwhile, issued an arrest warrant against Maurya after he failed to turn up for a scheduled hearing on Wednesday in a case that goes back over seven years.

Though Dara Singh Chauhan has not made it clear that he is joining the Samajwadi Party, the SP twitted a welcome message.

The recent developments are set to strengthen the SP's influence among the non-Yadav OBCs in the state, less than a month before the crucial elections that will also have an impact on the 2024 parliamentary polls.

Chauhan said he had worked with dedication for the past five year but Dalits, the OBCs and the unemployed did not get justice from the BJP government.

'It was the poor who had made the government but others took all the advantage in the past five years," he claimed after sending the resignation letter to Governor Anandiben Patel.

Chauhan, the minister for Forests and Environment, said he had been informing the party high command about the problems all through. But he was ignored, he claimed.

Like Maurya, he did not give a categorical answer when asked whether he was joining the SP. Chauhan said he would consult his supporters before deciding on a future course of action.

SP president Akhilesh Yadav, however, welcomed him in the party-fold on Twitter and posted a picture of them together.

"Hearty welcome and greetings to Shri Dara Singh Chauhan ji, the relentless fighter of the struggle for social justice. The SP and its allies will unite and take the movement of equality to its height... eliminate discrimination! It is our collective resolve! Respect everyone -- space for everyone," Yadav tweeted in Hindi.

Suheldev Bharatiya Samaj Party (SBSP) chief Om Prakash Rajbhar also welcomed the resignations of the two ministers. Once a BJP ally and a minister in the Adityanath government, he is now an SP partner.

"One or two wickets will fall every day from the BJP cabinet and this figure will reach one-and-a-half dozen by January 20," he said on a news channel.

"It hurts if any member of the family strays. I would only urge the respected gentlemen that it would be their loss only if they board a sinking boat. Elder brother Dara Singh ji, please reconsider your decision, he tweeted in Hindi.

On Tuesday, he had made a similar appeal to Maurya.

In the resignation letter, Chauhan said, "I have worked with full diligence for the betterment of my departments."

"But troubled by the complete neglect of the backwards, the deprived, Dalits, farmers and unemployed youth, besides the messing up of the reservation facility for Dalits and the backwards, I am tendering my resignation from the cabinet," the letter added.

He has also represented Ghosi seat in the 15th Lok Sabha for the Bahujan Samaj Party. In the next Lok Sabha elections, he was defeated by the BJP's Harinarayan Rajbhar by over 1.4 lakh votes.

He joined the BJP in 2015 and was appointed the party's OBC Morcha president and fielded from the Madhuban assembly constituency.

The case was lodged against Maurya in 2014 for allegedly making objectionable comments against Hindu gods. The MP-MLA court Judge Yogesh Kumar Yadav issued the warrant after he did not attend the scheduled court hearing on Wednesday.

Maurya reiterated that he is yet to decide on the party he is joining, but insisted that he won't return to the BJP. Technically, he has not quit the party, but just the ministry.

"My decision to quit has triggered an earthquake in the BJP. I pleaded with the leaders for the welfare of Dalits and the backwards but they couldn't care less," he said.

On Tuesday, three other BJP MLAs  Tindwari's Brajesh Prajapati, Tilhar's  Roshan Lal Varma and Bilhaur's Bhagwati Sagar --- had also announced that they were leaving the party. And rumours swirled about some others.

Sources said Bhadana is likely to be fielded from the Jewar Assembly constituency in Gautam Buddh Nagar district.