From night curfews to closing schools, these are the restrictions being imposed 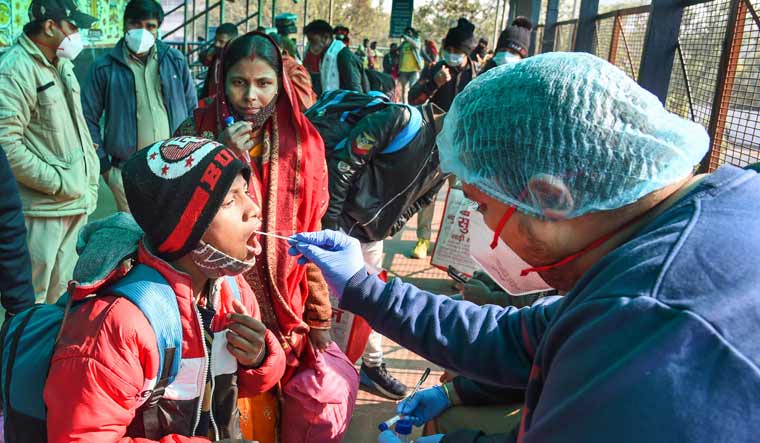 With the rise in cases, the governments are implementing fresh curbs across the states. From night curfews to closing schools, these are the restrictions in the wake of a third wave.

The Andhra Pradesh government imposed a night curfew from 11 pm to 5 am on Monday. The government will impose a penalty of ₹100 if masks are not worn in public. Theatres, multiplexes and cinema halls will only be allowed to function with 50 per cent occupancy. Public gatherings are also restricted with a maximum of 100 people indoor and 200 for outdoor gatherings.

Chief Minister Pinarayi Vijayan on January 10 declared that only a maximum of 50 attendees could take part at funerals and weddings. Though it was not specified if the decision was for open or closed spaces, the government has issued that strict curbs will be imposed on all gatherings- public or private.

The press release also said that ceremonies, reunions, and other events should be conducted online, except in unavoidable situations. In the case of physical meetings, strict precautions including physical attendance must be maintained. The state will not follow weekend or night curfew in the present situation.

Tamil Nadu reported 13,990 new cases of coronavirus in the last 24 hours and the state has sought to impose new restrictions especially with the Pongal festival round the corner.

The government on Monday extended the existing Covid restrictions till January 31.

The night curfew that was imposed from January 6 will continue till the end of the month, with a complete lockdown on January 16, Sunday. With regard to the Pongal festival, the government has permitted travel in state-run buses with 75 per cent occupancy. Additionally, the public will not be allowed entry to places of worship from January 14-18.

The Rajasthan government on Sunday announced the schools of classes up to 12 in the municipal corporation and municipality areas will be closed till January 30. The Online classes will be continued. The authorities also said that a weekend curfew from Saturday 11 pm to January 17 5 am will also come into effect. The daily night curfew will continue from 11 pm to 5 am During the curfew, all markets, workplaces and commercial complexes will remain closed, stated the guidelines.

Religious places will be open from 5 a.m. to 8 p.m. and only 20 people will be allowed to attend the functions. However, offerings like garlands, prasad, chadar and other things are banned.

A maximum of 100 people are permitted at marriage functions, but in municipal corporations and municipality areas, it will be 50 people till January 30.

With the highest number of cases in India, the Maharashtra government has imposed new restrictions. Night curfew will be followed from 11 pm to 5 am and movement in groups of five or more will be prohibited in public at that time. Till February 15 all schools and colleges will be closed. At marriage, religious or social or political gatherings, no more than 50 persons can attend while at funerals only a maximum of 20 persons can be present.

Restaurants, shopping malls can function at half capacity while in salons and gyms the 50 per cent capacity can be maintained to function with fully vaccinated staff.

Tourist places, parks and zoos will remain closed and the Health Minister has said gradually restrictions will be introduced in liquor shops and places of worship.

The government's offices will remain closed on weekends and will operate with 50 per cent staff on weekdays. There is a total ban on langars or community kitchens across the state.

With the soaring number of cases in the national capital, the Delhi Disaster Management Authority (DDMA) has imposed fresh curbs on Tuesday prohibiting the opening of all private offices except those under the exempted category, and the closure of all restaurants and bars, though delivery and takeaway will be allowed. The government has declared that work from home should be followed.