Assembly polls in UP, 4 other states from Feb 10; counting on March 10 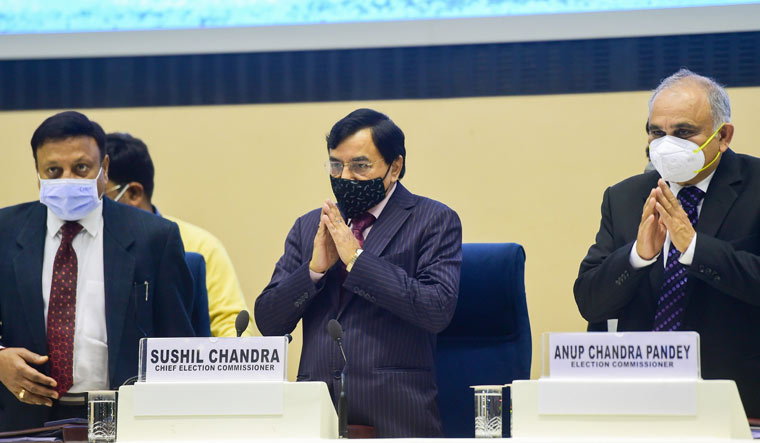 With the shadow of the surge in COVID-19 cases looming large on the conduct of the coming round of Assembly elections in five states, the schedule for which was announced today, the Election Commission has set the tone for a restrictive mode of electioneering as it banned roadshows, padyatras, vehicle rallies as also public meetings by parties and candidates till January 15.

The Commission has also come out with a revised set of guidelines, with Chief Election Commissioner Sushil Chandra emphasising at a press conference called to announce the election schedule that the onus of ensuring COVID-19 protocol as prescribed by the respective disaster management authorities of the states will be on the chief secretary and the district magistrates.

A seven-phase election schedule was announced by the Commission today for five states, with voting to take place on February 10, 14, 20, 24, 27 and March three and seven. While Uttar Pradesh will have polls in seven phases, Uttarakhand, Punjab and Goa will have a single-day polling on February 14 and Manipur will have elections in two phases on March 3 and 7. Counting for all the seats will be held on March 10.

The announcement comes amidst concerns over conduct of elections in the middle of the surge in COVID-19 numbers fuelled by the new Omicron variant.

Chandra said that the Commission had in view of the resurgence of COVID-19 cases held meetings with the Union health secretary, Union home secretary, health secretaries of the states and various health experts to assess the ground situation with regard to the spread of the virus in the five poll-going states before it decided to go ahead with the announcement of the election schedule.

“The decision to go ahead with the election schedule was taken after much deliberation,” Chandra said.

He said the situation was very dynamic and further decisions of the Commission with regard to the conduct of the elections will depend on how the pandemic pans out. A ban has been placed on roadshows, padayatras, cycle or bike rallies as also physical rallies by parties or candidates till January 15. The Commission will further decide on these modes of campaign taking into account how the COVID-19 situation develops.

No rallies or public meetings will be allowed between 8 pm and 8 am. No nukkad sabhas will be allowed. The Commission has also placed a ban on victory processions by winning candidates.

Parties and candidates will have to give an undertaking about adherence to COVID-19 protocol in their public meetings. Non-compliance to COVID-19 guidelines can result in cancellation of rallies and a decision can also be taken to cancel all further rallies by the parties or candidates in question.

The Commission was at pains to stress upon the measures it will be taking to ensure COVID-safe campaigning and voting. While the poll body was praised for the smooth conduct of elections in Bihar during the pandemic, it came in for extremely harsh criticism for its alleged failure to prevent parties and candidates from turning electioneering into crowded events with lack of adherence to COVID-appropriate behaviour during Assembly polls in early 2020, especially in West Bengal.

Seeking to dismiss the theory that elections can be superspreader events, Chandra said, “Maximum cases are being reported in Maharashtra, Delhi and Karnataka. There is no election happening in these states. So we cannot say that Corona is because of elections.”

The EC, Chandra said, had asked the chief secretaries of all poll-going states to accelerate the first and second dose of vaccination of all eligible persons above the age of 18.

In absolute figures, as on January 7, more than 15 crore people in these five states together have got the first dose of vaccine and more than 9 crore had been administered both doses.

Chandra credited the speeding up of vaccination rates in these states to the Commission's directives. The EC, he said, has also taken into account the positivity rates in the five poll-bound states before taking a call on announcing the election schedule.

The Commission has also directed that all central and state government officials deployed for election duty should be doubly vaccinated. On the recommendation of the EC, the Union Health Ministry had issued orders on February 8, 2021 that all election officials and employees would be treated as frontline workers and all eligible officials shall be given a precautionary booster dose accordingly.

The CEC said that anybody violating instructions on COVID measures will be liable to be proceeded against as per provisions of Section 51 to 60 of the Disaster Management Act, 2005 besides legal action under Section 188 of the Indian Penal Code and other legal provisions as applicable.

All polling stations will be equipped with masks, gloves and thermal scanners. The maximum number of voters per polling booth has been reduced from 1500 to 1250. COVID-affected voters will be provided the facility of postal ballot.

The Commission shall provide candidates with the option of filing their nomination online. Chandra said that the Commission's recent decision to enhance the election expenditure limit of candidates was taken partly in view of the need to shift to the digital mode of campaign because of the pandemic.

In view of the pandemic, the Commission has decided to extend the poll timing by one hour in all constituencies except for those in areas affected by left-wing extremists.