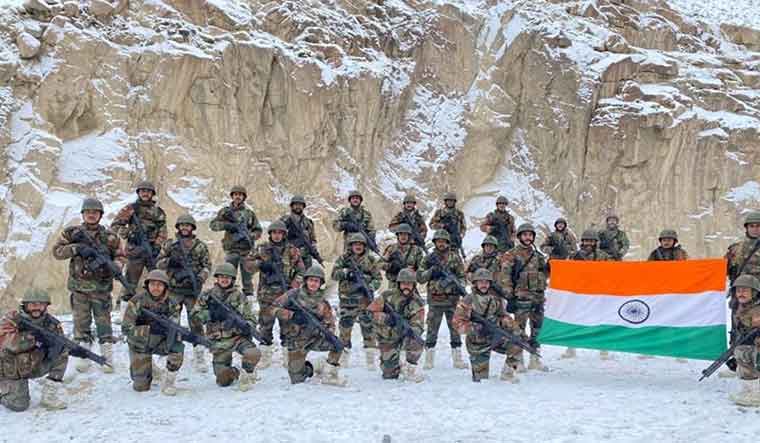 A day after the Chinese military shared a video showing the unfurling of the Chinese flag in the Galwan valley, India countered it by releasing pictures of Indian soldiers with Sig Sauer 716 assault rifles and the national flag in Galwan on New Year.

The latest images confirm the Indian military's presence in the contested zone.

It is contrary to Chinese military claims, as several shadow social media accounts of the Chinese People's Liberation Army (PLA) were tweeting images and videos of unfurling of the Chinese flag and sloganeering in the Galwan valley. Official sources in the defence ministry maintained that the video could have been shot anywhere along the Galwan riverbed on the Chinese side. "There was no geo-coordinate to indicate that it was shot at the LAC," an officer said.

The two armies have maintained a minimum physical gap between themselves called the demilitarised zone in the Galwan valley.

Indian Army and the Chinese PLA were involved in a bloody clash in the Galwan valley in June 2020. During the clash, the Indian Army lost 20 soldiers including a commanding officer. The PLA has only acknowledged four deaths in its ranks though unofficial numbers were quite high. The military standoff in eastern Ladakh is yet to be resolved as both sides are yet to completely disengage in some of the friction points.

Meanwhile, the Chinese military is on a road infrastructure building spree close to the border.  The PLA is building a bridge over the Pangong Tso on its territory in Khurnak, which is the narrowest part of the lake. China had captured the Khurnak Fort area in the late-1950s and then expanded its control westwards to the Sirijap area during the 1962 war. And military observers believe that it will cut down a distance of 180 km on the highway that connects Tibet with Xinjiang. Pangong Tso is partly in Ladakh and partly in Tibet, as India occupies one-third of the lake.

"The new bridge will bring down movement time of Chinese troops between the two sectors from around 12 hours to 3-4 hours. They are constructing multiple roads in-depth and hidden from India's line of sight to bolster their defences," said an officer, while adding that they were surprised with the Indian Army's move in August 2020 to capture key heights on the southern bank of Pangong Tso on Kailash range.

When the Chinese side was showing aggression at other friction points, the Indian Army, in Operation Snow Leopard on August 29, 2020, had managed to take control of some of the dominating heights in the southern bank of Pangong Tso. And by gaining control of those positions, the Indian Army could overlook the Chinese Moldo Garrison, which had irked the Chinese military that has been insisting India vacate the positions. Strategic heights like Magar Hill, Gurung Hill, Gorkha Hill and Reqin La was within their side of the LAC. But eventually, the Indian side agreed to vacate these heights after the military commanders’ talked to downsize the military strength on Pangong Tso.

As the military standoff with China on Eastern Ladakh is nowhere close to its end, the Indian military has also strengthened its infrastructure on the border areas in the last two years for faster movement of its troops to meet any untoward situation. Last week, 27 new roads and bridges built by the Border Roads Organisation (BRO), many of them close to the China border, were inaugurated by defence minister Rajnath Singh.