Despite all its efforts, Pakistan cannot take an inch of J&K land: Ghulam Nabi Azad 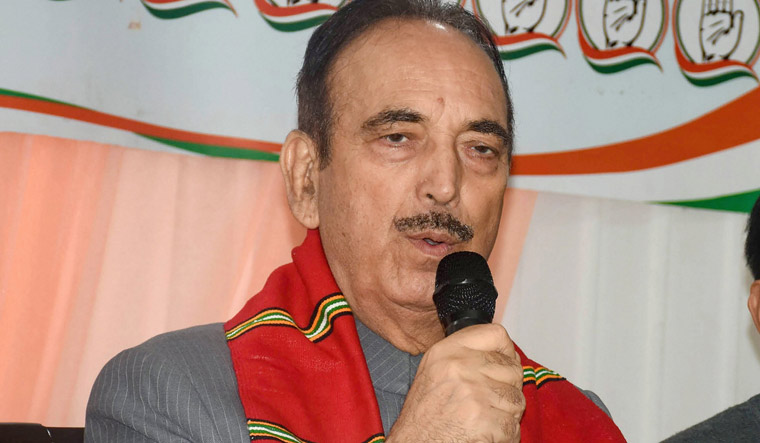 Pakistan cannot take an inch of Jammu and Kashmir's territory despite all its efforts, senior Congress leader Ghulam Nabi Azad said Sunday, lauding the security forces and the people of the Union territory for fighting Pakistan-sponsored terrorism for the past over three decades.

On the National Conference's and the PDP's persistent demand for holding dialogue with Pakistan to restore peace in Jammu and Kashmir, Azad said the decision on holding talks should be left to the BJP-led Centre.

Addressing a public meeting at Khour near the International Border in Jammu, Azad said border residents are the guardians of Indian borders and stand with the security forces.

"You have suffered a lot due to Pakistani shelling and firing over the past three decades. This is your third generation who are born and brought up under the roaring guns. Your fields remained uncultivated after mines were laid to stop infiltration (of terrorists) from Pakistan. You lost many lives, houses and livelihood to Pak shelling and firing. But I want to tell you that despite all its efforts, Pakistan cannot take even an inch of our land."

He said it is India's greatness that whichever party comes to power, its priority remains the defense of the borders.

"Want to remind Pakistan of its defeat in 1971 when our forces under the leadership of then prime minister Indira Gandhi separated Bangladesh. If you make any misadventure, we will teach you a lesson," he said.

Talking to reporters, Azad said the decision to begin any dialogue with Pakistan should be left to the government.

"I am nobody because I do not have to talk and I also do not know what the gravity of the situation is. It is not for the first time (we are not talking with Pakistan). Even in the past, we have discontinued talks during our government," he said, adding when things improve between the two countries and atmosphere is conducive, the talks can be held.

"So I think it is the government of India at the moment who shall have to decide," he said, responding to a question on persistent demands by the National Conference and the PDP for dialogue to restore peace in Jammu and Kashmir.

Assuring the border residents that whole of the country is behind them, Azad said he wants to tell Pakistan that India is united and nobody can harm it.

He said Pakistan-sponsored terrorism has ruined Kashmir but its attempt to disturb peace in Jammu region was frustrated by the people who stood united against the enemies of the country and their conspiracies.

Cautioning people against attempts to polarise the situation in the region ahead of assembly elections, Azad said politics is meant to bring people closer to each other but there are some national and regional parties who are out to divide people on the name of religion, region, caste and creed.

“We are fighting Pak sponsored terrorism for the last 31 years. We cannot afford internal fighting. If we have to move forward, we have to stand united and not fall to mischievous propaganda,” the Congress leader said, adding we have to bring down the walls of hatred and become one for our nation and its progress and prosperity.

He said the Congress never played politics on the basis of region or religion. “We will continue to work for the betterment of the people, their prosperity and ensure no discrimination.”

Targeting the BJP, he said the country is witness to wrong politics which is not based on justice.

"The government is equal for every citizen and does justice whether someone has voted for it or not. Everyone should be given his or her right but the situation today is that only those close to the ruling party are getting contracts while others are being sidelined."

Referring to the August 5, 2019 development when the special status of J&K under Article 370 was abrogated and the erstwhile state was divided into two Union Territories, he said, “Our struggle is based on justice as our state was snatched along with our rights over land and jobs.”

Azad alleged that the continuation of closure of schools in Jammu and Kashmir smells of a conspiracy as the government jobs have been opened for the youth of the rest of the country. “When our students are out of their schools for so long, how come they compete with their counterparts from other places?”

He said while the rest of India is moving ahead, the people in Jammu and Kashmir are headed towards poverty.

"We need a change which is possible when you support us. You have seen the rule of National Conference, PDP, Congress and BJP and now it is easy for you to decide whom to vote for," he said, appealing to the people to reject the parties dividing them.