Joshi reiterated the 12 lawmakers should at least express regret 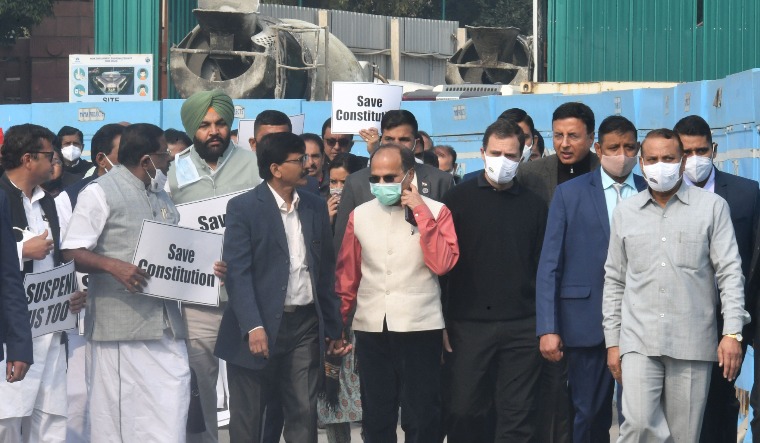 Weeks after 12 Rajya Sabha MPs of various opposition parties were suspended on the first day of the Winter Session of Parliament, the uproar over the issue has refused to die down.

The MPs were suspended for allegedly unruly conduct during the Monsoon Session.

On Tuesday, a number of MPs from different parties marched from the Gandhi Statue at Parliament to Vijay Chowk to protest against the continued suspension of the MPs. Opposition MPs also walked out of the Rajya Sabha after the deputy chairman rejected their demand to revoke the suspension.

On Tuesday, Union Minister for Parliamentary Affairs Pralhad Joshi was quoted by ANI as saying, “Government is in talks with them [suspended MPs] on an individual level for withdrawal of their suspension. I have made it clear that they should at least express regret.”

Joshi said “I call upon Congress leaders and others to express remorse and regret and come in the House. Government is ready for discussion on any matter.”

Earlier, Congress leader Rahul Gandhi, who participated in the opposition march, said “This [suspension of 12 MPs] is a symbol of the crushing of the voice of people of India. Their voices have been crushed. They have done nothing wrong. We are not allowed to discuss important issues in Parliament.”

He alleged, “Bills after bills are being passed in Parliament in the din. This is not the way to run Parliament. PM doesn't come to the House. We are not allowed to raise any issue of national importance. It is the unfortunate killing of democracy.”