Kashi corridor: PM Modi showers petals on workers, has lunch with them 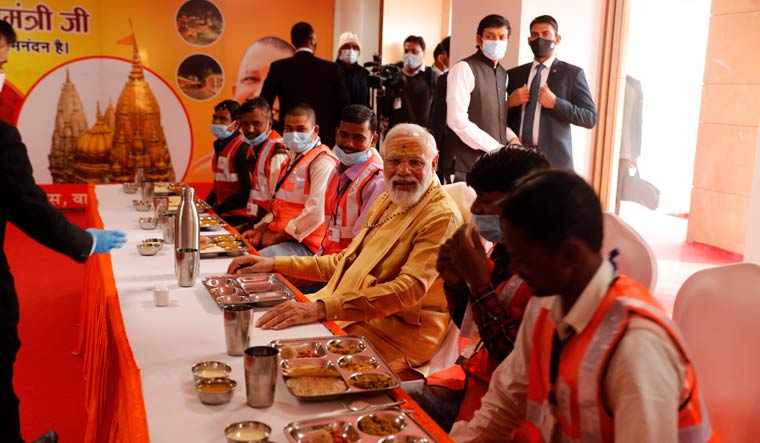 Prime Minister Narendra Modi felicitated workers who have been part of the construction of the mega Kashi Vishwanath Corridor by showering flower petals on them during the inauguration of the temple complex held with great pageantry in the holy city on Monday.

The prime minister also had lunch with the workers at a hall in the complex.

Modi acknowledged the contribution of people involved in the making of the corridor.

"Behind the success of the Shri Kashi Vishwanath Dham project is the hard work of countless individuals. During today's programme I had the opportunity to honour them and have lunch with them. My Pranams to these proud children of Bharat Mata!," he later said in his tweet, and also shared some pictures.

Labourers, engineers, and craftspersons from various parts of India have contributed to building the Corridor and refurbishing the premises of the revered ancient temple, the whole area being referred to as Kashi Vishwanath Dham.

Prime Minister Modi dedicated the Corridor in his Lok Sabha constituency Varanasi to the people after taking a holy dip in the river Ganga and offering prayers at the temple that draws lakhs of visitors from India and abroad.

Modi after performing 'puja' met a group of workers who sat on a terraced gallery near the temple. Walking among the workers with a flower basket, he felicitated them by showering petals on them.

The prime minister also sat with the workers in the gallery where a red carpet was laid and got pictures taken with them after gesturing them to sit closer to him.

In one of the pictures, PM Modi and workers posed with both hand raised, a symbolic gesture to hail Lord Shiva.

A giant banner bearing images of Modi and Uttar Pradesh Chief Minister Yogi Adityanath, and thanking the prime minister for realising the "dream of Kashi" was put up in the background.

Later, the prime minister also had lunch with them.

Prime Minister Modi in his address at the function Modi expressed his gratitude to workers involved in the construction of the grand temple complex, noting that they did not let even COVID stop the work here.

Ram Chand Kumar, a mason who hails from Bihar and has been working on the site for the last 5-6 months, hailed the prime minister's gesture.

"It is heartening to see us, common people, being acknowledged. 'Achha lag raha hai'," he told PTI.

The prime minister, in his address, said that Kashi (ancient name of Varanasi) has been the "centre of spiritual consciousness".

"And, now in a grand form, Kashi will now add energy to this consciousness," he said, clad in a golden coloured kurta-pyjama and an 'angavastra'.

He also said that Varanasi has been the "karmabhoomi and janmabhoomi" of many great personalities, and lauded Maharani Ahilyabai Holkar for constructing the temple ar around 1780.

A total of 23 buildings were on Monday inaugurated in phase one of the project of Shri Kashi Vishwanath Dham which has been constructed at a cost of around Rs 339 crore.

The project is now spread over a massive area of about five lakh square feet, whereas earlier premises were limited to just around 3,000 square feet.

Despite the COVID-19 pandemic, the work on the project has been completed on schedule, the Prime Minister's Office said in a statement on Sunday.

Posters have been put up on ornate lampposts in streets, near the iconic temple -- one of the 12 Jyotirlingas -- hailing Modi for "realising the vision of this project".

The current structure of the temple was constructed by Maharani Ahilyabai Holkar around 1780, and in the 19th century, Maharaja Ranjit Singh had got it crowned with a golden 'shikhar'.