Preparations to welcome farmers have been made at different toll plazas 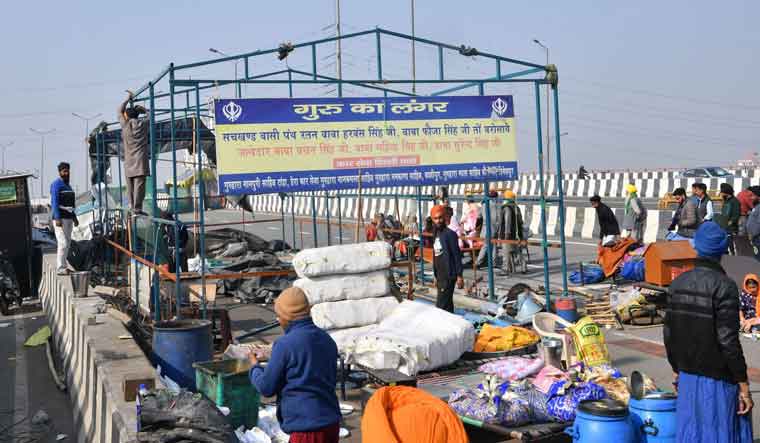 Farmers from Punjab and Haryana are being accorded a rousing welcome with sweets and garlands at several points on their return home on Saturday for the "victory" of their protests after the suspension of the agitation against the repealed farm laws.

Families of farmers along with fellow villagers at many places on the Delhi-Karnal-Ambala and Delhi-Hisar national highways along with other state highways enroute were welcoming and honouring the peasants coming in tractor trolleys with garlands, 'ladoos', 'barfi' and other sweets.

The Samyukta Kisan Morcha (SKM), an umbrella body of 40 farmers' unions, on Thursday had decided to suspend the over a year-long farmers' movement against the three contentious farm laws and announced that farmers would go back home on December 11 from the protest sites on Delhi's borders.

Villagers and others who supported the farmers' agitation carrying farmer bodies' flags, showered petals on peasants as they assembled on the roadside of the highways to welcome them.

A family came all the way from Chandigarh to welcome farmers near Singhu on the Delhi-Haryana border. We are here to welcome them. We will go back with them. We are elated and our happiness cannot be described in words. It (the victory) was the result of 'tapasya' (penance) of farmers who faced all sorts of hardships, including harsh weather conditions," said a Chandigarh resident, who actively supported the farmers' stir.

Because of the large convoy of tractor trolleys and other vehicles, traffic jams could be witnessed at many places on Delhi-Haryana national highway.

Some elated farmers, especially youth and women, performed Punjab's folk dance 'bhangra' to the beats of 'dhol' as they were on their way back to their homes in Punjab and Haryana.

At Khanauri near Punjab, villagers assembled in large numbers to welcome the agitators and also burst firecrackers amid a celebratory mood.

We are returning victorious, said a farmer from Ludhiana.

Preparations to welcome farmers have been made at different toll plazas and other places along the national highways.

A large convoy of tractor trolleys started returning to Punjab and Haryana in the morning after performing 'ardas' (prayer) at the Singhu border. Farmers headed homes after the suspension of the one-year-long agitation against the Centre's three farm laws.

Tractors, decorated with flowers and colourful lights and sporting national flag and farmer bodies' flags, were playing Punjabi songs of victory while the frequent chants of 'Bole So Nihal, Sat Sri Akal' rent the air.

Tractor trolleys were carrying cots, mattresses, utensils and other belongings that the farmers had carried with them during the agitation.

Near Bastara toll plaza in Karnal and at Shambhu border near Ambala, an arrangement of 'langar' was made for farmers returning to their homes. Some farmers including women were dancing and doing 'bhangra' at the Shambhu border to welcome the cultivators.

Notably, Shambhu inter-state border on the national highway was the place where the Haryana police last year on November 26 had used water cannons and tear gas to prevent farmers from heading towards the national capital.

The Haryana Police has made elaborate arrangements to ensure hassle-free movement of traffic on national highways in the state. A Haryana Police spokesperson on Friday had said the district Superintendents of Police have been instructed to ensure appropriate traffic, security, and law and order arrangements to ensure smooth flow of traffic in all districts between Delhi and Ambala, and Bahadurgarh and Hisar/Jind.