SP-RLD promise 'double-engine' govt in UP

Revolution of red will bring change in 2022, Yadav said in response to Modi's barb 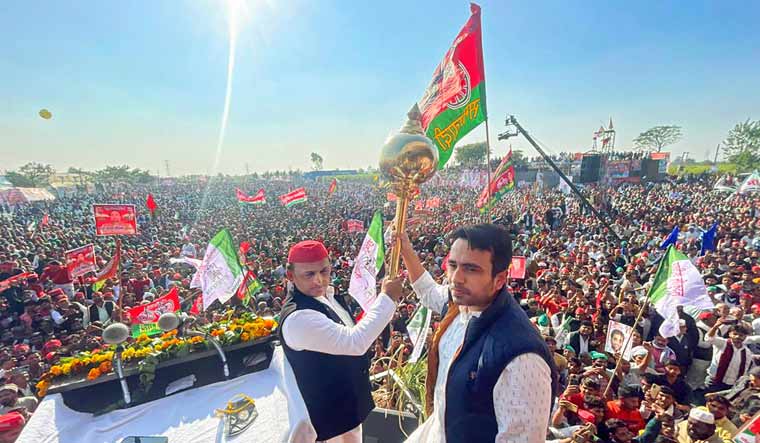 Samajwadi Party president Akhilesh Yadav and Rashtriya Lok Dal president Jayant Chaudhary during 'Parivartan Sandesh' rally ahead of the UP assembly elections in 2022, in Meerut | PTI

“The lal topi walas have been interested in lal battis; they have no concern for you,” said Prime Minister Narendra Modi in Gorakhpur, Uttar Pradesh, today. The reference was to the red cap worn by the Samajwadi Party members and the VIP cars with red hooters on them.

“The lal topi walas are red alerts for the state. They signal danger,” he said, at the inauguration of a fertiliser factory in the home district of Chief Minister Yogi Adityanath.

Hundreds of kilometres away in Uttar Pradesh’s far more prosperous Meerut, SP chief Akhilesh Yadav said, “We are making a bouquet of many colours, people with just one colour cannot bring colours to the lives of others.”

Yadav was there to announce the alliance with Rashtriya Lok Dal—an ally which it hopes will help it make a big dent in the west where the anger of farmers have been loud.

Yadav made clear his allegiance by bowing to both Ram Manohar Lohia and B.R. Ambedkar, and to the farmers.

“The farmers have shut their doors on the BJP,” Yadav said.

He also took on the ‘red’ reference, this time spinning the colour and word to indicate ‘red alert’.

“There was a red alert for the BJP,” he said. “In the form of inflation, unemployment, the distress of farmers and workers, that of violence against women and young people, in Hathras and Lakhimpur, and of business.

RLD president Jayant Singh said, “Akhilesh and I are walking together. We will form a double engine government,” he said.

“I have seen Baba angry a lot,” said Singh, taking a dig at Adityanath. “The only time I have seen him happy is when he plays with calves. So, he should be removed and left free to play with them.”

RLD hopes to contest 32 seats. A win in these elections, and a win against the BJP, are crucial for the party that has lost its Muslim supporters since it allied with the BJP in 2002.