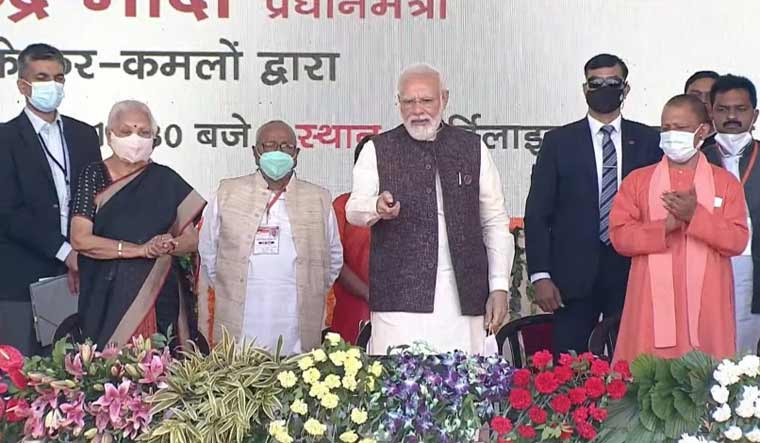 Prime Minister Narendra Modi tore into the Samajwadi Party at a rally in Gorakhpur on Tuesday.

Modi was speaking after dedicating three major projects in Gorakhpur to the nation. Gorakhpur is the home turf of Uttar Pradesh Chief Minister Yogi Adityanath. The projects included a campus of AIIMS, a fertiliser plant and a regional medical research centre of ICMR.

Modi alluded to the Samajwadi Party by using the term “red caps”, to denote the colour of the caps worn by party members.

Modi was quoted by ANI as saying, “The red caps want to form government to show leniency towards terrorists, to bring them out of jails. So always remember that the red caps are red alert for UP—they are bells to danger.”

Modi alleged, “entire UP knows that the red caps cared about 'red beacons' alone. They had nothing to do with your pain and issues. The red caps want power—for scams and for filling their coffers, for illegal encroachments, for providing freedom to mafia.”

Modi praised the performance of the Yogi Adityanath government in Uttar Pradesh. “When there is a government that worries about the oppressed and deprived sections, then it works hard and even yields results. The programme in Gorakhpur today is a proof of the fact the nothing is impossible for new India when it becomes determined,” the prime minister was quoted as saying by ANI.

He declared the 'double-engine government' (referring to BJP-led dispensations in both Centre and state) had continued with development even during the COVID crisis.

Modi said the Yogi government had cleared more dues of sugarcane farmers in its 4.5-year tenure than previous governments did in 10 years.