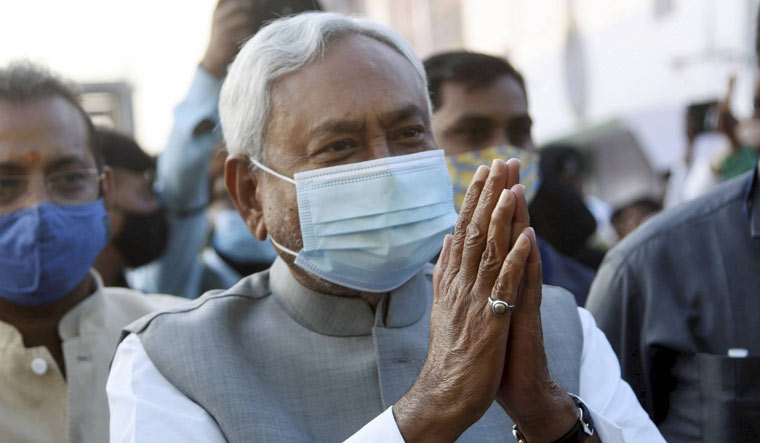 Barely a few days after Bihar Chief Minister Nitish Kumar, along with the public servants of the state, took an oath to abstain from consuming alcohol for the rest of their lives, empty liquor bottles were found in the Vidhan Sabha premises, leading to a confrontation in state assembly on Tuesday.

According to media reports, leader of opposition Tejashwi Yadav sought the resignation of Kumar over the incident. Calling it "a serious matter", the RJD leader said Kumar, who also holds the post of home minister, has no moral right to continue in the post. "There were bottles of Coca Cola as well. Is the home minister of Bihar sleeping," he said in the assembly.

Tejashwi Yadav has been alleging that the prohibition in Bihar existed only on paper and poor people were being targeted for its violation while those with resources could get liquor of their choice delivered at their doorsteps.

CM Kumar said he was unaware of the presence of alcohol bottles in the assembly premises and promised a probe into the issue. "I will tell chief secretary and DGP to get an inquiry done. It is not an ordinary thing if the bottles came here. The one who is doing this should not be spared. Strict action should be taken,” the CM was quoted as saying.

According to NDTV, the chief minister visited the spot where alcohol bottles were found and took photographs.

The Nitish Kumar government had, in 2016, imposed a ban on alcohol consumption. However, the ban has come under criticism after incidents of several deaths due to consumption of spurious liquor.

RJD chief Lalu Prasad Yadav had recently claimed that he had warned Kumar against a total prohibition, pointing out that alcohol was freely available in nearby states like Uttar Pradesh, West Bengal and Jharkhand besides neighbouring country Nepal and the ban in Bihar would give liquor smugglers a free run.