Suspension of opposition MPs likely to cause more disruptions in Parliament 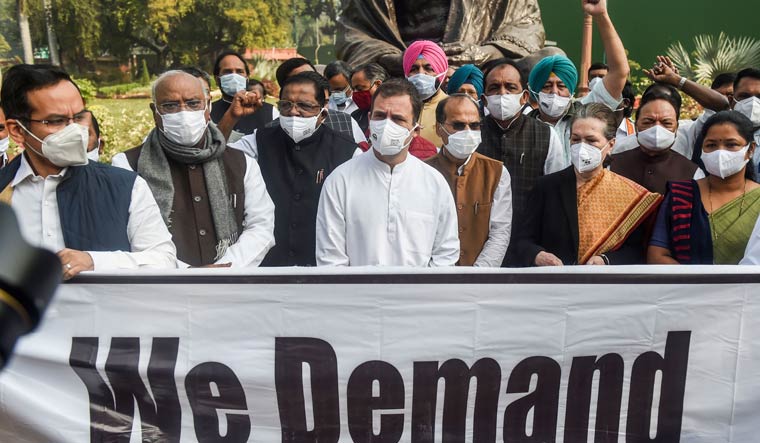 Congress president Sonia Gandhi, Rahul Gandhi and others stage a protest demanding repeal of Centre's three farm laws, at Parliament House ahead of the Winter Session, in New Delhi | PTI

The winter session of Parliament started on a stormy note. The bill to repeal the farm laws was passed in both Houses of Parliament in the matter of hours with a voice vote, without holding any discussion, which the opposition parties protested against.

However, what has provoked the opposition more is the suspension of 12 Rajya Sabha MPs. Taking cognisance of the “unprecedented acts of misconduct, contemptuous, unruly and violent behaviour and intentional attacks on the security personnel on the last day of Monsoon session”, the Rajya Sabha chairman suspended 12 opposition MPs belonging to Congress, TMC, Shiv Sena, CPI, CPI(M), for the remaining part of the current session.

The opposition was quick to “unitedly condemn the undemocratic suspension of 12 MPs”. Leader of Opposition Mallikarjun Kharge’s signed statement was supported by DMK, the Left parties, RJD, JDS, and Shiv Sena, among others. The floor leaders of the Rajya Sabha opposition parties will meet on Tuesday to deliberate on the course of action. The Upper House is likely to face more disruptions in the coming days.

Before the start of the session today, Prime Minister Narendra Modi had said, “This session should be rich in ideas and positive debates should have far-reaching impact. I hope Parliament should be judged how it functions and its significant contributions rather than who disrupted Parliament forcefully. This cannot be the benchmark. The benchmark would be how many hours the Parliament worked and how much positive work was done.

“The government is willing to discuss every issue with an open mind. The government is ready to answer every question. And we would like that there should be questions in Parliament and peace should also prevail.”

Modi said voices against government policies should be forceful but the dignity of Parliament and the Chair should be upheld. “We should maintain the sort of conduct that will inspire younger generations. Since the last session, the country has administered more than 100 crore COVID vaccine doses and we are now moving fast towards the figure of 150 crores. We should be alert to the new variant. I also request all the members of Parliament and to you also to be alert, because everyone’s health is our priority in this hour of crisis.”

The farm laws repeal bill was moved by Agriculture Minister Narendra Tomar in Lok Sabha, and later in Rajya Sabha. With the passing of the bill, it will now go to President Ram Nath Kovind for his assent. The government was in a hurry to pass the bill before the assembly elections, especially in Uttar Pradesh and Punjab, so that the farmers would call off their year-long agitation. The farmers bodies are likely to a take call on Parliament passing the bill. The bodies have been insisting on bringing a law on guaranteeing MSP for crops.