Congress vs Congress on 26/11? Tewari hits back at Adhir

Chowdhury had said that instead of Mumbai attacks, Tewari should focus on China 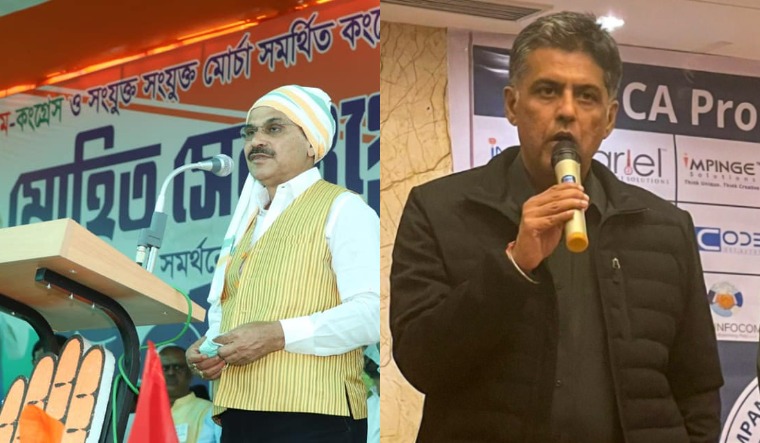 Days after Adhir Ranjan Chowdhury criticised him and asked him to focus on China instead of the 26/11 attacks, Congress leader Manish Tewari on Sunday hit back at Chowdhury. Tewari posted screenshots of his tweets directed at Defence Minister Rajnath Singh in which he raised the issue of the government's response to China.

Tewari had in his latest book, 10 Flashpoints: 20 years, which is set to be released on December 2, criticised the UPA government for its response to the 26/11 Mumbai terror strikes. He had written “restraint is not a sign of strength” and that India should have taken concrete action following the attack.

Chowdhury, who is the leader of the Congress in Lok Sabha, last week had hit out at Tewari over his criticism of the UPA dispensation for its response to the 26/11 Mumbai terror strikes, saying the ex-Union minister didn't raise it when he was part of the government.

Chowdhury had said that instead of the 26/11 attacks, Tewari should focus on China and its recent activities along India's border.

Hitting back at Chowdhury, Tewari tweeted, “Dear @adhirrcinc Dada, The screen shots of the tweets addressed to Hon'ble Defense Minister @rajnathsingh ji below hope address your concern and criticism also.”

Tewari had tweeted “The continued incursions by China and the response of NDA/BJP government to them do form a substantial part of my book.”

Tagging a media report on Rajnath Singh referring to his book to say that the UPA government did not take effective action after Mumbai terror attacks, Tewari tweeted, “Respected @rajnathsingh ji, trolls in your party I understand but as Union defence minister I would urge you to read my book if you seriously think surgical strikes or Balakot bombings have brought about any substantive change in behaviour of Pakistan.”

“In terms of domestic political messaging there may have been some windfalls, however, the central dilemma of how really efficacious is the response of conventional force to depredations of non-state actors is still seriously debatable,” Tewari said, adding that even today it remains a challenge as much as it was in 2008.

“I will discuss this and a lot more including response of your government to continued Chinese incursions since April 2020 that form a substantial part of the book after its formal launch on December 2, 2021. If you have the time please do come Sir,” Tewari said in his series of tweets addressed to Rajnath Singh.

Later, he posted screenshots of the tweets and hit back at Chowdhury.

In his book, Tewari had also hit out at the Narendra Modi government, alleging the scrapping of the Mountain Strike Corps is the “greatest disservice” that the BJP government did to India's national security.

Tewari is a member of the 'Group of 23' leaders who had written to Congress chief Sonia Gandhi seeking organisational overhaul and elections for every post in the party.