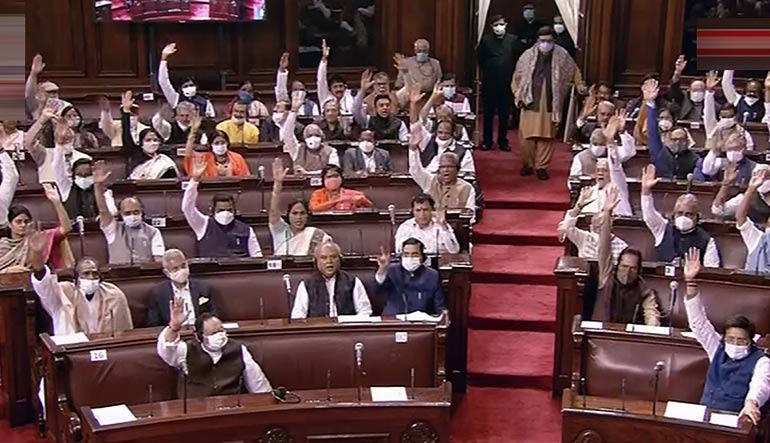 The leaders of the opposition parties, on Monday, condemned suspension of 12 opposition members—six are from the Congress, two each from the TMC and Shiv Sena and one each from the CPI(M) and the CPI—calling it "unwarranted and undemocratic."

In a joint statement, the parties said the move was "in violation of all the rules of procedure of Rajya Sabha pertaining to suspension of members."

The MPs have been suspended for the remaining part of the winter session for their misconduct and unruly behaviour during the last session. Rajya Sabha had witnessed ugly scenes when the opposition members were protesting against the three farm bills during the monsoon session.

"The motion moved by the government for suspending the members in regard to the unfortunate incident that occurred in the previous session is unprecedented and violates the rules of procedure and conduct of business of the council of states (Rajya Sabha)," the statement read.

The leaders of opposition parties will meet on Tuesday to discuss the future course of action "to resist the authoritarian decision of the government and defend Parliamentary democracy."

The Congress members who have been suspended from the house are: Phulo Devi Netam, Chhaya Verma, Ripun Bora, Rajamani Patel, Syed Nasir Hussain and Akhilesh Prasad Singh. Priyanka Chaturvedi and Anil Desai of the Shiv Sena, Dola Sen and Shanta Chhetri of the TMC, Elamaram Kareem from CPI(M) and Binoy Viswam from CPI are the other members who faced disciplinary action.