Many residents of Chennai and suburbs are grappling with inundation 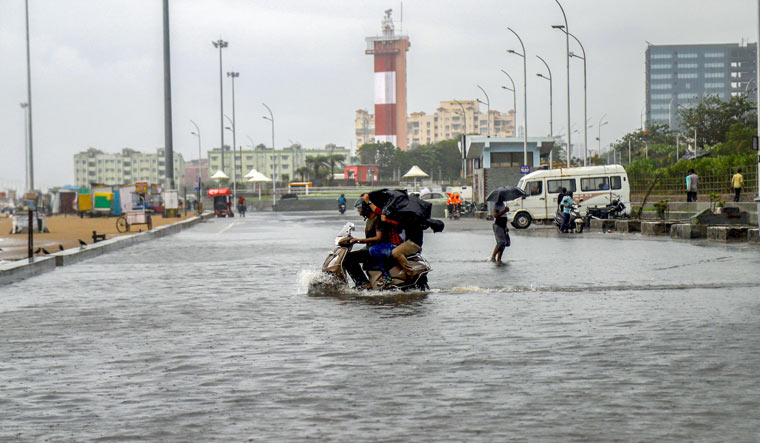 People wade through a waterlogged road after heavy rain near Marina Beach, in Chennai | PTI

Schools and colleges in Chennai and six other districts in Tamil Nadu —Thiruvallur, Chengalpet, Kanchipuram, Tiruvarur, Tirunelveli and Tuticorin—will remain closed on Monday as "heavy to very heavy rainfall" is expected in the state.

Heavy rains continued to batter several parts of the state on Sunday, with Nagapattinam receiving 17 mm rains, Kodaikanal 15, and Chennai 6.5 mm, till 5:30 pm.

Many residents of Chennai and suburbs are grappling with inundation, with several roads and subways being closed for traffic. Rain water entered several houses in low lying suburban areas in Urapakkam and Guduvanchery.

Reservoirs in the state, including Poondi and Chembarambakkam, released over 10,500 cusecs of surplus water in view of continuous showers in catchment areas. The release of surplus from Poondi dam in Tiruvallur district was stepped up (from an initial 4,253 cusecs to about 8,000 cusecs) in a phased manner upto about 12,000 cusecs by Sunday evening.

Chief Minister M.K. Stalin inspected the flood-hit areas in Tiruvallur district and handed over relief material to people. In a tweet, the chief minister expressed confidence that the state will soon recover from the losses caused by the rains.

Stalin had earlier said this is only the fourth time in the last 200 years 1,000 mm (100 cm) rainfall was recorded in a single month in Chennai.

From October 1 to November 28, Chennai received 109.76 cm rainfall. While 61.16 cm is the normal, this showed an excess of 79 per cent, according to Regional Meteorological Centre's report.

For assistance, people may call the 24 x 7 toll free number 1070 (state-level control room in Chennai) or 1077, the number for control centres in districts.