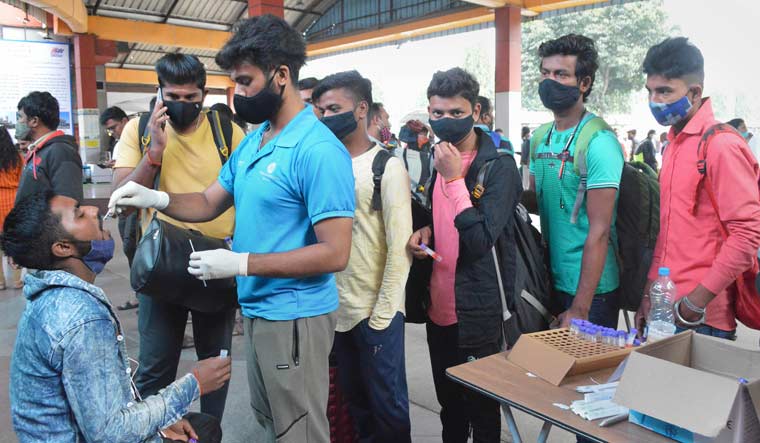 With new clusters emerging in Karnataka and threats of new variant 'Omicron' looming large, the state government on Saturday announced certain precautionary measures and said it has sought the Centre's permission to administer a booster dose of COVID-19 vaccine.

"Regarding administering booster dose, we have made a request to the central government. It will be administered to frontline workers on priority on getting approval. We may get approval in a week," Revenue Minister R Ashoka told reporters after the meeting.

He said RT-PCR negative report is mandatory for those travelling to state from Kerala and Maharashtra and authorities deployed at check points have to compulsorily check it.

Students who have travelled to the state from Kerala 16 days ago have to undergo RT-PCR test, despite them possessing negative test reports and those staying in hostels will also have to undergo tests once again after seven days, despite having negative certificates now, the Minister said.

"We have asked to maintain high vigil along the Kerala and Maharashtra border, especially Kerala. Deputy Commissioners of districts bordering Kerala like Dakshina Kannada, Mysuru, Kodagu and Chamarajanagara have been alerted," he said. Other than police, Revenue and other department officials will be deployed at the checkpoints on a routine basis in shifts.

Noting that two doses of vaccination have been made compulsory for those working at  government offices, malls, hotels, swimming pools and theaters, Ashoka said directions have been given to increase tests for students of medical and nursing colleges.

He said Deputy Commissioners have been asked to maintain extra vigil amid an increase in COVID cases at educational institutions and that schools and colleges have been advised to postpone events if not scheduled, and added that in the days to come, the government may consider prohibiting such events.

"The Health department will also be issuing guidelines in this regard, he said, adding that educational institutions will also be advised to postpone seminars as well.

The government's announcement of measures come in the backdrop of schools and colleges turning into clusters in Dharwad, Anekal, Sarjapura and Mysuru.

Pointing out that "careless behavior" such as not wearing masks or maintaining social distancing have been noticed at marriages and functions, the Minister said guidelines will be issued regarding wearing masks and other precautionary measures and will be issued in couple of days.

"We are currently in the advisory phase....based on the COVID cases and scenario in the coming days, the government may take certain stringent measures," he added.

Regarding Christmas and New Year celebrations, Ashoka said another round of meetings will be held under the CM's leadership and separate guidelines will be issued for it.

Clarifying that no new variant cases have been reported in the state so far, he said, experts have told the state government that the new Omicron variant spreads five times faster than the existing ones.