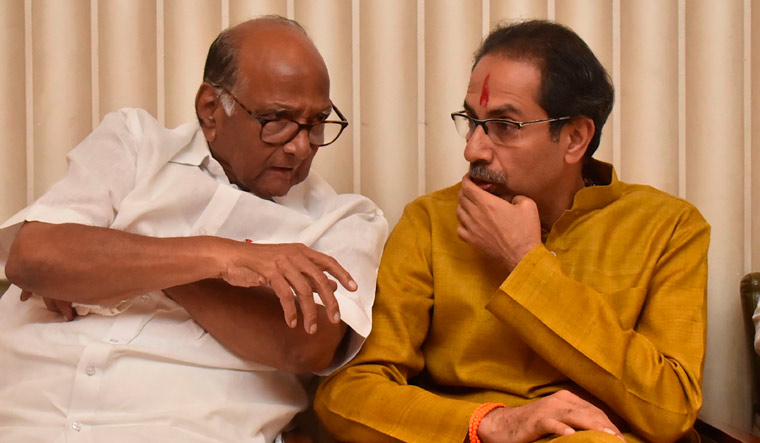 The Uddhav Thackeray-led Maha Vikas Aghadi (MVA) government in Maharashtra which completes two years in power on November 27 has survived against all odds amid the coronavirus pandemic.

The unlikely coalition of the Thackeray-led Shiv Sena and its traditional foes NCP and Congress has remained stable despite different ideological leanings of its constituents, unresolved tricky issues like Maratha reservation and an aggressive BJP.

The pandemic broke out within months of the coalition coming to power, but political observers say it could have benefited the government in an unexpected way, as it shifted the focus away from its common minimum program and the alliance's internal frictions.

But the government had a massive challenge on its hands as Maharashtra, the most urbanized state in the country, struggled to contain the spread of the virus.

At one point the state was recording as many as 24,000 new coronavirus infections a day.

As the economy took a hit, new big-ticket projects were kept on hold and the focus was on completing ongoing infrastructure projects like the coastal road and Mumbai-Nagpur expressway, said a senior state minister.

The government found itself in a spot when the Supreme Court, in separate matters, set aside the quota for the politically dominant Maratha community in education and jobs, and reservation in local bodies for Other Backward Classes.

The opposition BJP accused the Thackeray government of failing to argue its case in favour of Maratha quota strongly.

The government sought to put the ball in the BJP-led Union government’s court by demanding that it carry out a constitutional amendment to make overall reservations above 50 per cent feasible.

A new episode of political drama began amid the second wave of the pandemic when an SUV with explosives was found near the south Mumbai residence of industrialist Mukesh Ambani.

The mystery became murkier when Thane businessman Mansukh Hiran, who had claimed the vehicle had been stolen from his possession, was found dead in a creek.

It led to the arrest of `encounter specialist' police officer Sachin Waze and transfer of IPS officer Param Bir Singh from the post of Mumbai police commissioner.

Singh, in turn, accused then home minister Anil Deshmukh of the NCP of corruption. Deshmukh denied the allegations but had to step down, and a CBI probe began against him.

Initially on the backfoot and unsure about how to react, the government set up a judicial commission to probe Singh's allegations. Extortion cases were filed against Singh, on the other hand.

In a first-of-its-kind situation, the state saw Singh, a former Mumbai police commissioner, being declared absconder in extortion cases, and his one-time boss, former home minister Deshmukh, being arrested by the Enforcement Directorate.

Raids by the ED and Income Tax department on properties linked to MVA ministers and leaders led to allegations that the BJP, smarting from the loss of power despite getting the highest number of seats in the 2019 Assembly polls, was trying every means to destabilize the government.

The drugs-on-cruise case in which Bollywood actor Shah Rukh Khan's son Aryan was arrested created sensation, but later the Narcotics Control Bureau (NCB) and its Mumbai zonal director Sameer Wankhede found themselves in the dock as state minister Nawab Malik launched a tirade against them, claiming they were framing up innocent people.

Allegations by a witness that there was an attempt to extort money to let off Aryan Khan provided ammunition to Malik.

With the NCP leader's allegations hogging the limelight every day, the opposition BJP struggled to change the narrative, political observers say.

Decline in the intensity of the pandemic and relative success of the government in avoiding the situation witnessed in Delhi and some northern states at the peak of the second wave was a plus point for the MVA government.

But the knotty issues of Maratha quota and OBC political reservation remain and can create trouble for the government.

Over ten municipal corporations, 27 zilla parishads and more than 300 gram panchayats are going to polls early next year, and it will be interesting to see if the MVA manages to put up a joint front against the BJP.

The Congress, which is looking to regain its once dominant position in Maharashtra politics, is not in favor of contesting local bodies polls in alliance.

On the other hand, the coalition’s durability can provide a template for opposition at the national level ahead of the 2024 Lok Sabha polls, political observers say.