The submarine is fitted with advanced weapons and sensors 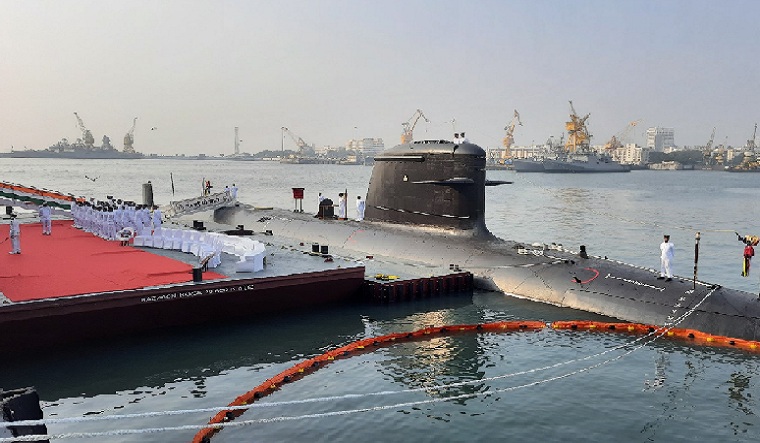 INS Vela at the naval dockyard in Mumbai | Twitter

“Once dived, she is truly poised for the kill with very impressive stealth and strength”. This is what the Navy boasts about its latest submarine INS Vela, inducted in the fleet on Thursday.

INS Vela is the fourth of the Scorpene class built by Mumbai-based Mazagon Dock Shipbuilders Limited (MDL) in collaboration with the M/s Naval Group of France.

On the occasion, Navy chief Admiral Karambir Singh recalled that the induction of the Foxtrot’s in 1967 heralded the birth of the Indian Navy’s submarine arm. "The quantum leap in Indian Navy’s operational capabilities was evident in the 1971 Indo-Pak war where IN submarines played a crucial role. In similar vein, submarines of the Project 75 claim to transform the war-fighting abilities in the underwater domain in the years to come," Admiral Karambir said.

The old Vela was a Foxtrot class submarine acquired from the erstwhile Soviet Union in 1973 and she served the nation for 37 glorious years.

Admiral Karambir further said that the submarine building involves high levels of sophistication, with requirement of high degree of precision. "The platform in front of us today showcases India’s notable strides in indigenous submarine construction, as also the journey from being a ‘Buyer’s Navy to a Builder’s Navy’," he said.

The Scorpene is a 2000 tons conventional-propulsion submarine for all types of mission, such as surface vessel warfare, anti-submarine warfare, long-range strikes, special operations and intelligence gathering. Extremely stealthy and fast, it has a level of operating automation that allows a limited number of crew, which reduces its operating costs significantly. Its combat edge is highlighted by the fact that it has six weapon launching tubes and 18 weapons (torpedoes, missiles, mines).

"These submarines have a state of the art SONAR and sensor suite permitting outstanding operational capabilities. They also have an advanced Permanent Magnetic Synchronous (PERMASYN) motor as its propulsion motor," a navy official said.

INS Vela is fitted with advanced weapons and sensors. All of these are integrated into the Submarine Tactical Integrated Combat System, also known as SUBTICS. Once a target is classified, the submarine may choose to engage it using either her sea skimming missiles also known as Flying Fish or heavy weight wire—guided torpedoes.

Despite having a coastline of 7,516 km, India's underwater capability is nowhere close to its needs. Ideally, the Indian Navy needs at least 24 submarines to meet its 30-year submarine-building plan, which was approved by the cabinet committee on security in 1999, months after the Kargil conflict.

It is notable that while China operates 65 submarines, the Indian Navy’s fleet of attack submarines, all diesel-powered, has come down from 21 in the 1980s to just 17 at present. At least half of the available submarines are old and creaking, and undergoing mid-life upgrade.

Few month back, the Ministry of Defence had issued the much awaited Request of Proposal (RFP) for the Rs 43,000 crore project to domestically construct six new-generation stealth submarines with foreign collaboration.