I want to unite 130 crore people of the country, this is true Hindutva: Kejriwal

"Whatever is going on in the name of Hindutva today is not Hindutva," said Kejriwal 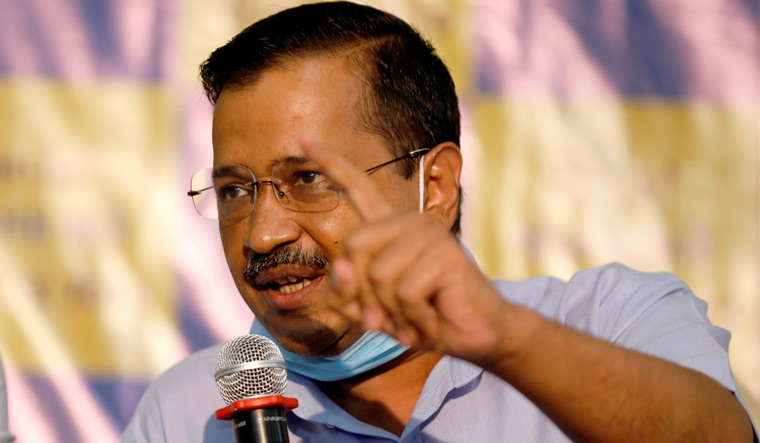 Delhi Chief Minister Arvind Kejriwal on Wednesday said his Aam Aadmi Party (AAP) is following "true Hindutva" as it wants to unite 130 crore people of the country and take the nation on the path of development.

Dividing people in the name of religion, engineering riots and committing atrocities on Dalits is not Hindutva but to unite one human being with another is, he said in a veiled attack on the BJP while replying to a question at a summit organised by a news channel.

Kejriwal also dismissed as "absolutely wrong" the charge that he is playing soft Hindutva card for votes in the run-up to assembly polls in four states with his recent visit to the Ram temple in Ayodhya and his government's approval to the Tirth Yatra Yojana for senior citizens in Delhi.

The AAP is gearing up to contest assembly polls on all seats in Uttar Pradesh, Punjab, Goa and Uttarkhand due to be held early next year.

"I don't know what is soft Hindutva. I want to unite 130 crore people of this country, unite one human being with another. This is Hindutva...Hindutva unites, Hindutva doesn't break," Kejriwal said.

Underlining that Lord Ram is adored by every Hindu, he said every word that Ram said, his life and character, is Hindutva to him.

Without taking any names, Kejriwal said abuses were hurled at him by some people after he recently celebrated Diwali in Delhi and visited Ayodhya in Uttar Pradesh for darshan of Shri Ram.

I want to ask is it a sin to celebrate Diwali nicely, visit Ayodhya for darshan of Ram ji? he said.

To a question on his government approving the 'teerth yatra' scheme to take senior citizens in Delhi on pilgrimage to Shirdi, Ajmer, Ayodhya and other religious places, Kejriwal said everybody has spiritual needs and the Delhi government is ensuring these are fulfilled.

What is wrong in that? he asked.

Replying to questions on his party's poll strategy in Punjab, Goa, Uttarakhand and Uttar Pradesh, the AAP national convenor said his party will showcase the Delhi model of governance and development.

People want the Delhi model in every nook and corner of this country. If people want us, why shouldn't we go? We ask for votes to improve the quality and standards of  schools, provide good hospitals and electricity. This is what we have done in Delhi, he said.

On his party's poll prospects especially in Punjab and Goa, he hoped that the voters there will appreciate the Delhi model of governance and give their mandate to the AAP.

People will decide, he said as he explained how infighting in the Punjab Congress and the people's resentment with the Shiromani Akali Dal (SAD) could help AAP win people's trust.

Taking on those who criticise him for doling out freebies, Kejriwal defended his decision and termed it good politics.

All ministers get free power but that is not called a freebie. I give 200 units of free power to people, free education to children and they have problems. I want to give everything to people that the ministers get for free, he said.

I apply the formula of good politics, good economics, good intent and honesty to provide free power and other facilities to people, he said.

Facing criticism over the formation of toxic foam in the Yamuna, the Delhi chief minister asserted that the river will be cleaned by the time next assembly polls are held in the city.

Kejriwal also assured that fuel prices in the city will be reduced substantially.

We will do it. We are calculating. Whatever we do, we do substantially. We don't play dirty politics of increasing (fuel) prices by up to Rs 50 and reducing it by just Rs 5, he said in a veiled attack at the Narendra Modi government at the Centre.

Replying to a question on the ongoing farmers' agitation against the three new farm laws, Kejriwal said the demands of protesters were justified.

Why is the Centre adamant? It should accept their demands, he said.