The TMC leader questioned PM Modi's silence on the issue 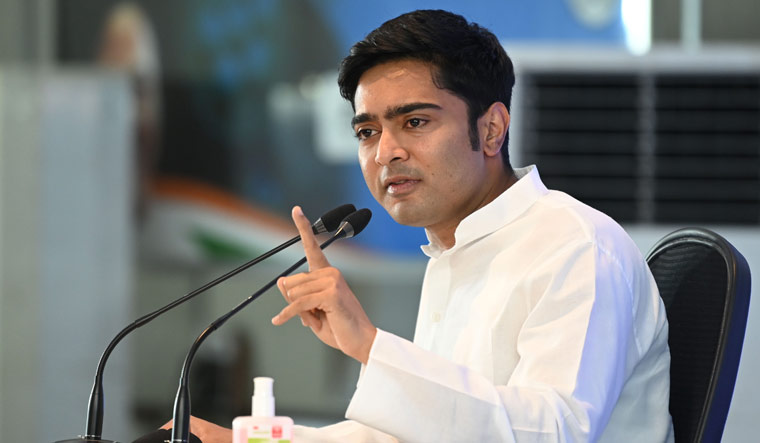 TMC national general secretary Abhishek Banerjee Tuesday accused the BJP of trying to polarise the upcoming by-elections in the state by using the issue of violence against the Hindu minority in neighbouring Bangladesh as a poll plank.

The de facto number two in the Trinamool Congress also criticized BJP for "thrusting" on the people by-election in two of the four seats that will go to the poll later this week.

"The Prime Minister during the (West Bengal) assembly polls went to Bangladesh. But now, he is maintaining a silence on the issue (of violence against Bangladeshi Hindus). The BJP, which boasts of being the saviour and the flag bearer of  Hindu religion, is trying to gain mileage from the communal violence in Bangladesh. The BJP leaders are saying that they will benefit from the violence against the minorities in Bangladesh. This is the true nature of BJP," he said while addressing a by-poll rally here.

Banerjee condemned atrocities on Hindus in Bangladesh, where Durga Puja marquees were attacked and torched, besides attacks on  minority community houses and businesses earlier this month.

BJP has kick-started a high pitch campaign in Dinhata and Santipur in Coochbehar and Nadia districts which border Bangladesh and has highlighted the atrocities on Hindus in the neighbouring country.

The two constituencies have a sizeable number of voters who trace their roots to Bangladesh. They had to leave erstwhile their homes during India's partition in 1947 or later under the Pakistani regime. BJP won both the seats in the April-May state poll.

"What has the BJP done for the Hindus, refugees, Sanatanis in the last seven years? I challenge them to a debate (on) the amount of developmental work we have done versus what they have done. I can vouch that I would score a clear victory as TMC has kept all its promises," he said.

Banerjee slammed local MP and former MLA from the seat, Jagannath Sarkar, for allegedly failing to deliver development to people of Santipur.

The winning BJP candidates Jagannath Sarkar (Santipur) and Nisith Pramanik (Dinhata) resigned as MLAs after being elected in order to retain their position as MPs. "If they were so keen on holding on to their Lok Sabha seat, they should not have fought assembly election," Banerjee said.

Pramanik was inducted into the central ministry as union minister of state for home and sports.<br>"Jagannath Sarkar did nothing for the people of Santipur. In the last three years in parliament, he has never uttered a word related to Santipur," he said.

Banerjee also hit out at the Congress party for allegedly failing to fight the BJP and claimed that the TMC Supremo Mamata Banerjee is emerging as the "undisputed leader" from Kashmir to Kanyakumari.

"There are several other national parties. But they have failed to put up a fight against the BJP. Congress has surrendered before the BJP in the last seven years. It is only TMC that has not bowed before the threats of the saffron camp," he said.

The TMC leader asserted " We will never bow our heads - the more you threaten us, the more fearsome force we will turn into ... Mamata Banerjee is the spearhead to fight and defeat the Modi-Shah regime in the next general election," he asserted.