People's money is now going back to them, says Modi in UP

Modi also announced 28 projects worth Rs 5,189 crore for his constituency 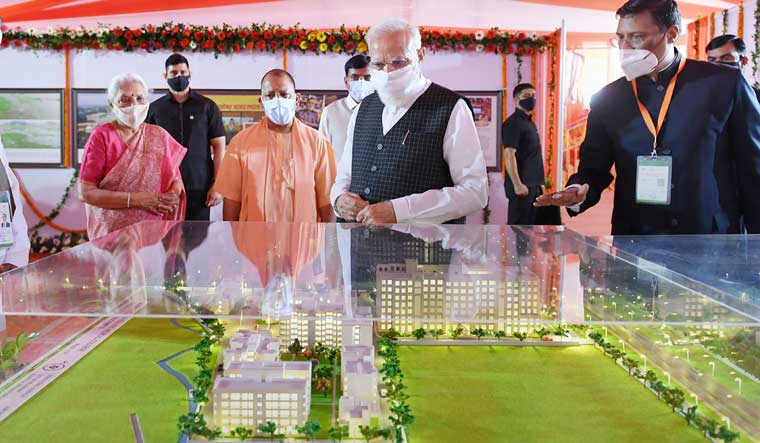 Modi also announced 28 projects worth Rs 5,189 crore for his constituency. He said that Varanasi was earlier synonymous with overhanging electricity wires, rocky roads, pollution and traffic jams. “The people of Varanasi were used to no entry,” he said, referring to the city’s persistent traffic snarls.

“People’s money went into the safes of the rich; now, it is going back to the people,” said Modi.

Before addressing a public rally in Varanasi, Modi also laid the foundation of nine medical colleges while in Siddharthnagar. This is the first time a prime minister has visited the district that is the birthplace of Lord Buddha.

The medical colleges in Fatehpur, Etah, Mirzapur, Jaunpur, Siddharthnagar, Dewariya, Hardoi, Pratapgarh and Ghazipur have received permission from the National Medical Commission to operate from the 2021-22 session. This, the PM said, would produce more doctors in the next few years than have been produced in the decades since Independence.

The names of the medical colleges are a nod to icons that the government wishes to identify with. Thus the one in Pratapgarh is named after the late Sonelal Patel, the founder of the Apna Dal, an outfit that was born as a political force of the Kurmis. Anupriya Patel is the minister of state for commerce and industry and the MP from Mirzapur. The latter is an important constituency as it lies adjoining Varanasi.

The institute in Siddharthnagar bears the name of Mahadev Prasad Tripathi, a leader of the Bharatiya Jan Sangh. The one in Deoria is named after Deoraha Baba, a highly revered saint who lived on the banks of the Yamuna.

Some of these institutes are not up-from-scratch, new medical colleges. The one in Etah, for instance, is an upgraded district hospital. New buildings like the one in Fatehpur are still awaiting completion.

Speaking on the occasion, Uttar Pradesh Chief Minister Yogi Adityanath said the medical colleges and other schemes inaugurated by Modi were “pre-Diwali gifts” to the people.