Congress announcing 40 per cent tickets to women in UP polls is 'pure election drama': Mayawati 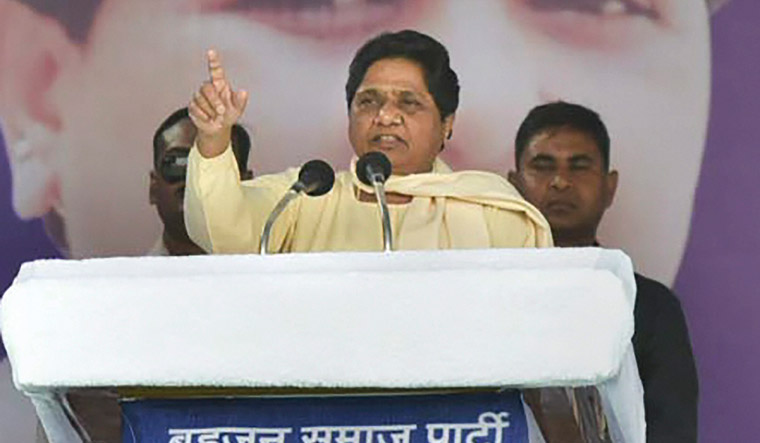 BSP chief Mayawati, Tuesday, termed a "pure election drama" the Congress' announcement to give 40 per cent of tickets to women in the 2022 Uttar Pradesh assembly polls, saying the party remembers women, Dalits and backwards only when out of power.

She alleged the Congress lacks the will power to make concerted efforts for the welfare of women.

Otherwise, she said, when it was in power it could have brought a law for 33 per cent reservation for women in Parliament and legislative assemblies.

Earlier in the day, Congress general secretary Priyanka Gandhi Vadra announced her party will give 40 per cent tickets to women in the upcoming assembly elections in Uttar Pradesh.

In a tweet in Hindi, Mayawati said, "When it is in power and going through good days, the Congress does not remember Dalits, backwards and women. But now when they are going through a low period which refuses to go away, they have remembered women in Uttar Pradesh like they did Dalits in Punjab."

"The announcement of giving 40 per cent tickets to women is nothing more than a pure election drama," she added.

She said if the Congress was so concerned about women, why did they not make the provision of 33 reservation for them in Parliament and legislative assemblies when the party was in power.

In another tweet, Mayawati said, "In Uttar Pradesh and across the country, women constitute half the population. A continuous process of concerted and sincere efforts are not only required for their welfare but also their safety and respect and this needs strong will power which is hard to find in the Congress and the BJP. Whereas the BSP has shown it by doing so."

Uttar Pradesh is scheduled to go to assembly polls in early 2022.