The SKM warned that protests will be intensified 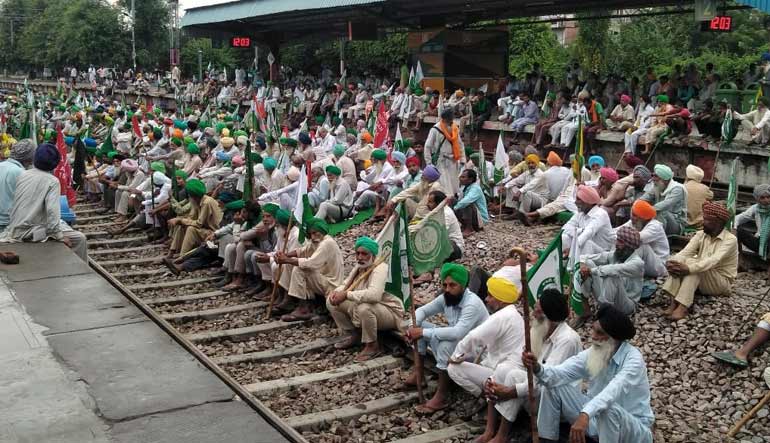 Protesting farmers, including women, raised slogans against the BJP-led government and demanded the arrest of Ajay Mishra | Aayush Goel

The Samyukt Kisan Morcha (SKM), on Monday, claimed that their leaders were detained and arrested at several places during their six-hour 'rail roko' protest in which thousands of farmers peacefully participated to demand the dismissal and arrest of Union Minister Ajay Mishra over the Lakhimpur Kheri violence.

The SKM warned that protests will be intensified further if its “demands for justice in Lakhimpur Kheri massacre are not met".

The umbrella body of farmer unions, spearheading the agitation against the Centre's three farm laws, said more than 290 trains were reportedly affected and over 40 trains cancelled.

"In Uttar Pradesh, there were many detention of farmer leaders at numerous places by the UP Police. In Madhya Pradesh, the police arrested protestors at several places like Guna, Gwalior, Rewa, Bamaniya (in Jhabua) and other places," the SKM claimed in a statement.

It added that protestors were also arrested in Kacheguda at Hyderabad in Telangana.

"In hundreds of locations across India, protesting farmers occupied railway tracks and platforms for six hours today in response to Samyukt Kisan Morcha's rail roko call. Men and women in thousands came out for implementing the rail roko plan and at many places, they did so braving heavy rain and downpour," the statement claimed.

The six-hour protest was organised to demand for MoS Home Ajay Mishra's dismissal and arrest, "so that justice can be secured in the Lakhimpur Kheri massacre", the SKM said.

Protesting farmers, including women, raised slogans against the BJP-led government and demanded the arrest of Ajay Mishra.

Four of the eight people who died in the violence on October 3 were farmers, allegedly knocked down by a vehicle carrying BJP workers. Angry farmers then allegedly lynched some people in the vehicles. The other dead included two BJP workers and their driver.

Farmers have claimed that Ajay Mishra's son Ashish was in one of the vehicles, an allegation denied by him and his father who say they can produce evidence to prove he was at an event at that time. Ashish Mishra was arrested in the case on October 9.

Security was deployed at rail stations in the wake of the protest.

In the North Western Railway (NWR) zone, rail traffic was affected in some sections in Rajasthan and Haryana with 18 trains cancelled, 10 partially cancelled and one diverted due to the protest.

The trains that have been affected in the Northern Railway zone include the Chandigarh-Ferozepur Express. Its scheduled departure from Ludhiana was 7 am, but has been stranded there due to a blockade in the Ferozpur-Ludhiana section, the official said.