The death toll has risen to 21 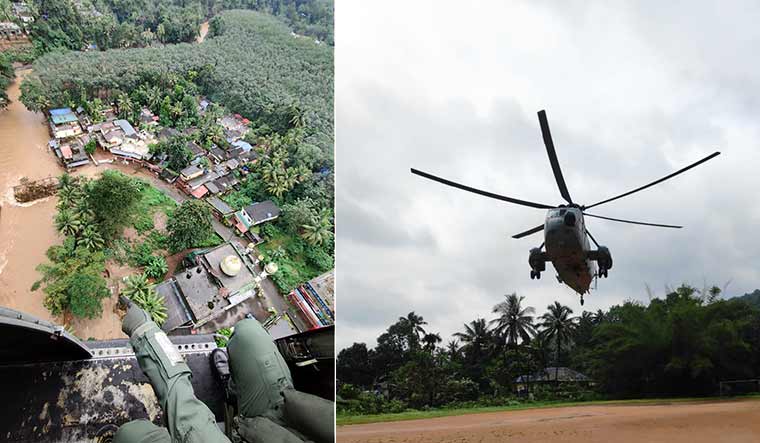 The Indian Navy's Southern Naval Command carried out relief operations in Kerala on Sunday as heavy rains resulted in dozens of casualties, leaving many stranded and in need of aid. A helicopter was launched from the Naval Air Station at INS Garuda to deploy relief materials to Kootickal in Kottayam district and to Kokkayaar in Idukki, where multiple landslides have been reported.

In a release, the Southern Naval Command said it deployed the helicopter following a request from the Kerala State Disaster Management Authority (KSDMA). The Navy also ferried relief materials including water bottles from Southern Naval Command's resources to the nearest helipad at JJMM HS School-Yendaya.

Aerial sorties were undertaken to assess the status of floods and landslides in order to help authorities plan land-based search and rescue (SAR) operations (which had been restricted on Saturday due to poor weather conditions). Air assets, rescue teams, and a team of naval divers have been kept on standby.

The state government had also sought the assistance of the Army and Air Force. Air assets like Mi-17 and Sarang helicopters have already been placed in standby mode.

At least 21 people have died since heavy rains battered the state since Friday evening, with numerous landslides and floods reported in Kottayam and Idukki districts. With 13 deaths, Kottayam suffered its worst rain damage in recent history. Idduki was the second-most affected region, with 13 bodies recovered, accounting for all of those who have been reported missing. However, unreported bodies continue to resurface, NDTV reported.

Chief Minister Pinarayi Vijayan urged the people of the state to take precautions against the heavy rains and said 105 relief camps had been set up across Kerala.

On Saturday, 11 National Disaster Response Force (NDRF) teams were earmarked for deployment in the south and central parts of Kerala.

The NDRF's 4th battalion in Arakkonam conducted search and rescue operations in several parts of Kerala on Sunday including Kokkayar, Ernakulam and Pathanamthitta.

Spoke to Kerala CM Shri @vijayanpinarayi and discussed the situation in the wake of heavy rains and landslides in Kerala. Authorities are working on the ground to assist the injured and affected. I pray for everyone’s safety and well-being.

Prime Minister Narendra Modi discussed the situation in Kerala with CM Vijayan on Sunday. In a tweet, he said authorities are working on the ground to assist the injured and affected. "I pray for everyone's safety and well being," the PM said, offering his condolences to the bereaved families.

The KSEB said that water levels in Idukki, Kakki, Sholayar and Moozhiyar were under control and that the shutters of major dams would not be opened. Earlier in the day, a red alert had been sounded in the region near the banks of the Pampa and Kakkatar rivers, after the water level at the Kakki and Anathode dams neared full capacity.

Sabarimala pilgrims have been advised not to wade into the river for the ritualistic dip, with showers now installed for devotees to take baths instead.