The meeting comes amid rumblings within the Congress' state units 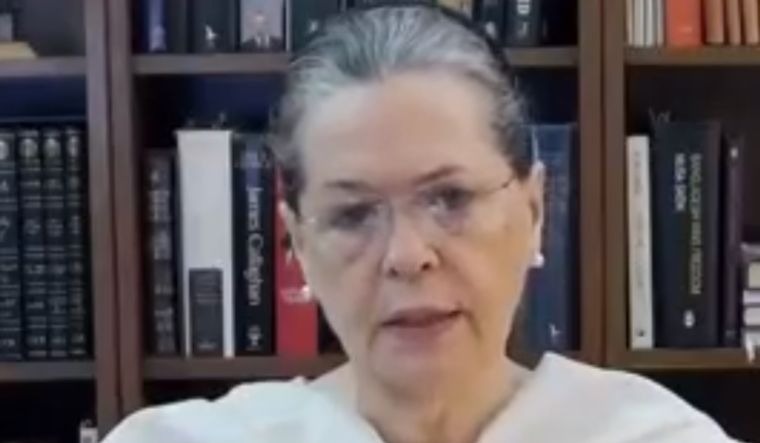 Speaking at the first physical meeting of the Congress party's top decision-making body, the Congress Working Committee (CWC), since the outbreak of the COVID-19 pandemic, Sonia Gandhi announced that she was the "full-time" Congress president. The remark is widely construed as a retort to leaders like Kapil Sibal, one of the G-23 members, who had stated publicly that the party does not know who the Congress president is, and who has been making the decisions.

“I am, if you will allow me to say so, a full-time and hands-on Congress president. I have always appreciated frankness. There is no need to speak to me through the media. So let us all have a free and honest discussion. But what should get communicated outside the four walls of this room is the collective decision of the CWC," she said.

The first organisational elections, forthcoming assembly polls and the current political situation, including the Lakhimpur Kheri incident, was on top of the agenda. Sonia said that the interests of the party comes paramount.

NDTV reported that the CWC is expected to give the go-ahead for an organisational election for a full-term chief rather than an interim poll for the post of president. The overwhelming view amongst most CWC members is to have a membership drive and internal elections from the grassroots to the top and elect a president for a full term and not for a short period till December 2022, the publication quoted sources as saying.

The Indian Express reported that several Congress leaders, including members of the Group of 23 who have been seeking sweeping changes in the party structure, argued that the party should not go in for polls now and should focus on the forthcoming assembly elections in five states.

The meeting also comes amid rumblings within the Congress' state units such as in Punjab, Chhattisgarh and Rajasthan where the party is in power.  The G-23 leaders have been demanding the convening of the CWC with Kapil Sibal last month wondering who in the party was taking decisions in the absence of a full-time president and asserting that G-23 leaders' grouping is "not a Jee Huzur 23".

Former leader of the Opposition in the Rajya Sabha, Ghulam Nabi Azad, had also written to the Congress president to convene a meeting of the CWC. The party, in its CWC meeting held on January 22, had decided that the Congress would have an elected president by June 2021, but the same was deferred at the May 10 CWC meet in the wake of the COVID-19 situation.

The latest meeting is being held in the wake of the Lakhimpur Kheri clashes on October 3 in which eight people lost their lives, including four farmers who were allegedly run over by an SUV belonging to the convoy of Union Minister of State for Home Ajay Kumar Mishra. Minister of State for Home Mishra's son Ashish Mishra, who has been named in an FIR, was arrested on Saturday by the Uttar Pradesh Police in connection with the mowing down of the four farmers. The incident has given enough ammo to the Congress to corner the BJP government and recapture the lost political space.

The meeting is likely to discuss key issues such as price rise, farmers' protests and the economic situation of the country. The CWC meeting will also discuss certain dissenting notes rising within the party over the spate of defections and the party's poor electoral fortunes.

Sonia Gandhi took over as the interim Congress president in August 2019 after Rahul Gandhi resigned in the wake of the party's Lok Sabha debacle in May 2019. There have been demands from a section of Congress leaders for having a full-time and active party president as well as an organisational overhaul. The demand grew louder after a storm in the party in August last year over a letter to Sonia Gandhi by a group of 23 leaders, including Ghulam Nabi Azad, Anand Sharma, Bhupinder Hooda, Prithviraj Chavan, Kapil Sibal, Manish Tewari and Mukul Wasnik raising these issues.