NIA had registered the case on October 10 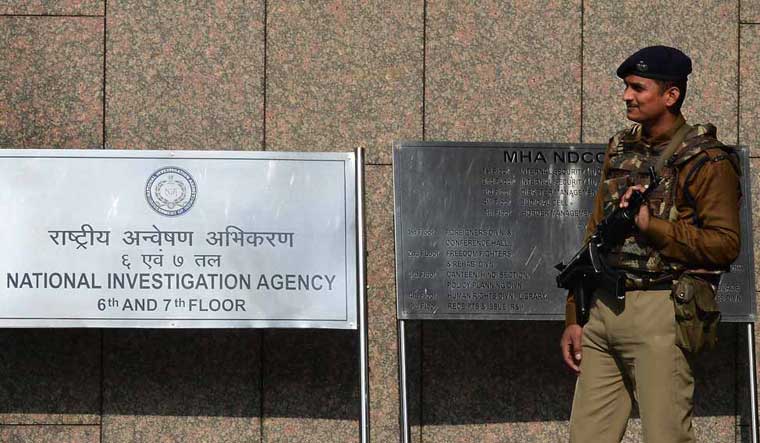 The NIA has arrested nine terror associates during searches at 18 locations in Jammu and Kashmir after registration of a case over a conspiracy launch attacks in the union territory and other major cities including New Delhi, an official said on Wednesday.

The National Investigation Agency (NIA) had registered the case on October 10 and initiated an investigation.

An NIA spokesperson said a total of nine people were arrested -- five on Wednesday and four a day earlier -- after multiple searches in different districts of the valley over the past two days.

The NIA identified the five accused arrested on Wednesday as Mohammad Haneed Chiralu and Arif Farooq Bhat of Srinagar, Hafeez of Budgam, Owais Dar of Pulwama and Mateen Bhat of Shopian.

"The NIA conducted searches at two locations in Srinagar and seized electronic devices and incriminating Jihadi documents," the spokesperson said on Wednesday.

The NIA also said during the day that four accused people -- Waseem Ahmad Sofi, Tariq Ahmad Dar, Bilal Ahmad Mir alias Bilal Fafu and Tariq Ahmad Bafanda, all residents of Srinagar -- were arrested during the searches carried out at 16 locations in Srinagar, Pulwama and Shopian districts on Tuesday.

The spokesperson said preliminary investigation has revealed that the nine arrested accused are terror associates or Over Ground Workers (OGWs) of various proscribed terrorist organisations and have been providing logistical and material support to terrorists and facilitating them in their nefarious designs.

The NIA said the case pertains to alleged hatching of a conspiracy both physically and in cyberspace to carry out violent terrorist acts in Jammu and Kashmir and other major cities, including New Delhi, by the cadres of the proscribed Lashkar-e-Taiba (LeT), Jaish-e-Mohammed (JeM), Hizb-ul-Mujahideen (HM), Al Badr and other similar outfits and their affiliates such as The Resistance Front (TRF) and People Against Fascist Forces (PAFF).

"The terror associates/Over Ground Workers of these organisations are conspiring with their handlers and commanders based in a neighbouring country and also indulging in radicalisation of local youth for the purpose of recruiting and training them in handling of arms, ammunition and explosives," the spokesperson said.

The spokesperson said these terrorists and cadres have effected several terrorist acts including the killing of numerous innocent civilians and security personnel, and unleashed a reign of terror in the Kashmir valley, thereby challenging the writ of the state.

The NIA said further investigation in the case continues.