Farmers will hold a 'mahapanchayat' in Lucknow on Oct 26 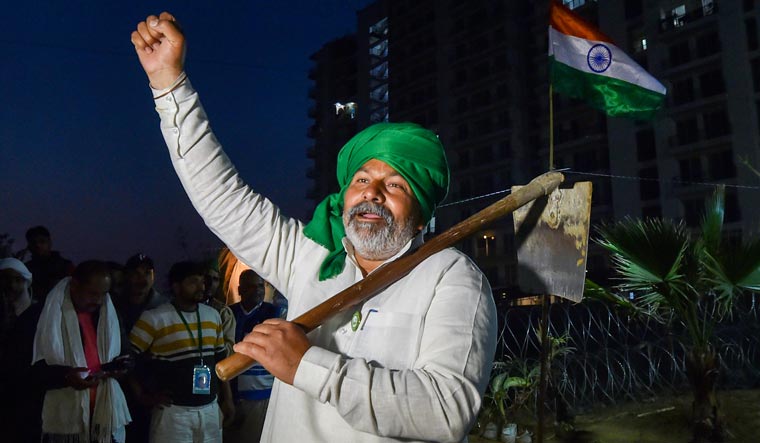 The police action against MoS Ajay Mishra's son Ashish Mishra in the Lakhimpur Kheri violence case was a "red carpet arrest" and he was given a "bouquet" during interrogation, farmer leader Rakesh Tikait claimed in Barabanki of Uttar Pradesh on Wednesday.

In Barabanki to attend a mass marriage programme, the Bhartiya Kisan Union (BKU) leader said farmer unions will continue their agitation till Ajay Mishra is sacked from the Narendra Modi Cabinet.

"Our agitation will continue till the minister is sacked. Demanding his sacking and arrest, we will hold a 'mahapanchayat' in Lucknow on Oct 26," Tikait told reporters.

Asked about the protest against the Centre's new farm laws, Tikait said, "One day this government will withdraw them. For this, if we have to agitate for 10 years, we will do so."

On the 2022 assembly polls in UP, Tikait said the BKU will decide on a strategy after the implementation of the model code of conduct.

Eight people were killed in the Lakhimpur Kheri violence on October 3. Four of them were farmers, who were allegedly knocked down by a car carrying BJP workers travelling to welcome Uttar Pradesh Deputy Chief Minister Keshav Prasad Maurya to an event in the area.

The four others included two BJP workers, a driver of Union Minister of State for Home Ajay Kumar Mishra, and Raman Kashyap, a journalist working for a private TV channel.

While the first three were allegedly lynched by agitating farmers, the scribe, according to his father, died after being hit by a vehicle when he was covering news of farmers' protest against Maurya's visit to Ajay Mishra's native place.

Ashish Mishra, who has been named in an FIR, was arrested on Saturday. Five other persons have been arrested till Wednesday evening in the case.