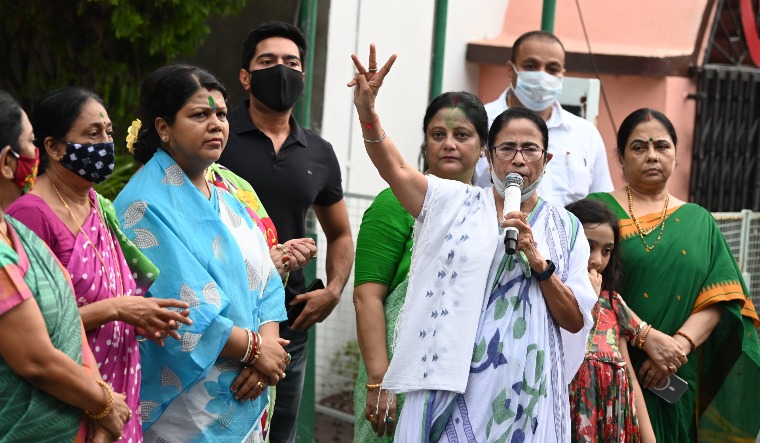 Mamata Banerjee reacts after her victory in Bhabanipur | Salil Bera

West Bengal Chief Minister Mamata Banerjee on Sunday declared she was "freshly inspired to work more for the people”.

Mamata made the comment after she won the bypoll to the Bhabanipur Assembly seat by a record margin of 58,832 votes, defeating BJP rival Priyanka Tibrewal.

Speaking to mediapersons, Mamata was quoted by ANI as saying she had registered "victory in every ward of the constituency".

Taking aim at the Narendra Modi government, Mamata said, "Since the elections started in Bengal, Central government hatched conspiracies to remove us (from power). I was hurt in my feet so that I don't contest the polls. I am grateful to the public for voting for us and to ECI for conducting polls within 6 months."

Mamata declared, "Around 46 per cent of people here (in Bhabanipur) are non-Bengalis. They all have voted for me. People of West Bengal are watching Bhabanipur, which has inspired me."

Mamata was quoted by News 18 as saying, "I will not show V sign. I will show three fingers because I am not contesting alone. My colleagues in Jangipur and Samserganj are also winning comprehensively." In Samserganj, Amirul Islam of the TMC was leading over his nearest rival from the Congress by 14,842 votes, while in Samserganj, Jakir Hossain was leading over Sujit Das of the BJP by 52,531 votes.

With bypolls due in five Assembly seats on October 30, Mamata used the occasion of her victory in Bhabanipur to declare candidates to three constituencies. She said Brajakishore Goswami would contest from Shantipur, Udayan Guha from Dinhata and Sovan Deb Chattopadhyay from Khardah.

Priyanka Tibrewal had written to the chief justice of the Calcutta High Court seeking orders to the Kolkata Police to take measures to prevent post-poll violence. “Taking the ghastly scenario (of post-poll violence in May) into reference, I, as a candidate for this by-election, humbly request you give a strict order to all the government enforcement department to take extreme precautionary measures so that no innocent life is lost, no sexual crime is committed, no public is left homeless, no incident of arson is recorded and we live in a peaceful environment come what may be the outcome on the 3rd October, 2021," Tibrewal was quoted as saying by News 18.