UP STF arrests three for funding for religious conversions

Till now, 11 arrests have been made in UP and other states 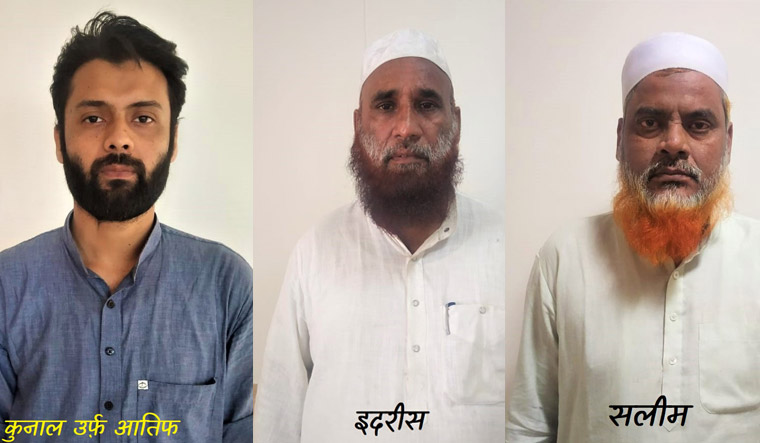 Three persons have been arrested by a Special Task Force of the Uttar Pradesh Police for allegedly routing money through the hawala route for illegal religious conversions. As per a note issued by the force on Sunday evening, the arrested have been unable to account for a sum of Rs 20 crores in their bank accounts.

Till now 11 arrests have been made in UP and other states in connection with illegal religious conversions.

The three latest arrests are of Mohammed Idris Qureshi, a resident of Khatauli in Muzaffarnagar; Mohammed Salim also from Muzaffarnagar and Kunal Ashok Chaudhary alias Atif of Nasik (Maharashtra).

The force has in its custody Islamic scholar Kaleem Siddiqui who was arrested on September 21. Further details of a countrywide conversion racket are supposed to have been gleaned from him while questioning.

According to the STF, Siddiqui has confessed that he had made the spread of Islam his life’s mission. “When we convert anyone, we inform our associates abroad…they give us a lot of money which is personally very beneficial for me,” Siddiqui has said. He has named the three arrested as his associates.

The police had first traced Rs 3 crores in the accounts of the trust headed by Siddiqui, and then a further Rs 20 crores from different accounts. Money to these accounts has come in from Bahrain and Kuwait, in addition to other countries.

As per the police, Mohammed Salim has been involved in the task of religious conversions for the last 17 years and has worked on Siddiqui’s instructions. Atif has been involved in these activities for the last two years while Mohammed Idris has been working for the cause for 20 years. The last was mainly responsible for arranging funding for the activities.

The STF note also says that Mohammed Idris has got himself constructed a house worth Rs 60 akhs in the last few months and has a high-end motorcycle worth Rs 2.5 lakhs. He has been unable to account for the source of this wealth to the police.

The religious conversions were carried out under the garb of social welfare activities.

Usman Engineer, a Muzaffarnagar based social activist said, “Political parties want the votes of Muslims. However, no party has condemned the arrest of Maulana Kaleem Siddiqui. This is unfortunate”. He specifically blamed the Samajwadi Party, the Congress and the Rashtriya Lok Dal for their silence over the issue.